One of Netflix’s highly anticipated series Dear White People is making its way back to the streaming service with its fourth and final season.

A quick 47-second teaser was released on Friday, which gave fans a quick glimpse of Winchester University, the studio, and some of their favorite characters like Colandrea “Coco” Conners, and the lead character Samantha White.

It opened up with a voice saying “Alright” as they prepare for a show, but end the trailer with the cast’s rendition of Montell Jordan’s 1995 hit single “This Is How We Do It.”

Although the first look does not give too many hints about what will go down while viewers’ favorite Winchester students try to finish out their senior year, it does look like there will be more singing and dancing involved this season.

Like the previous three seasons, there will be a total of 10 episodes, and it will premiere on Sep. 22.

Netflix revealed in the synopsis that this season will be a bit more animated than the previous seasons as it has been transformed into a 90s-inspired musical.

The synopsis reads, “Set against the backdrop of senior year at Winchester as well as a not-so-distant, post-pandemic future, Dear White People Vol. 4 finds our characters looking back at the most formative (and theatrical) year of their lives.

Both an Afro-futuristic and ’90s-inspired musical event, Dear White People Vol. 4 is a can’t-miss, farewell experience with one pitch-perfect promise: Sometimes the only way to move forward is to throw it back.”

Dear White People creator Justin Simien also posted the trailer on his Instagram with the corresponding captions that read, “Made a musical during the pandems cause Black joy was needed ✌🏾DWP V. IV Sept. 22.”

But that’s not the only reason the writer’s name is in the headlines.

While Simien says farewell to his beloved series, he’s gearing up to create new projects with Paramount Television Studios. Deadline announced that Simien signed a three-year contract with the production company and is said to “develop premium television series aimed at various platforms via his Culture Machine production company.”

In his statement, the 38-year-old said, “During Dear White People’s incredible four-season run, it’s been an honor to facilitate bold-by-design, inclusive-by-default storytelling that pushes for better, more nuanced representation on screen as well as in the writer’s room, the director’s chair and across all departments.

Backed by an enthusiastic dream team at Paramount Television Studios, I’m thrilled to have the resources to apply my passion for identifying and developing the stars, storytellers, and artists of tomorrow on an exponentially larger scale.” 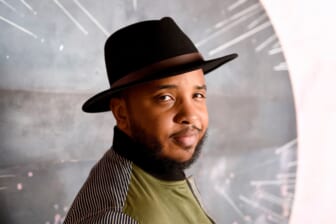 He ended his statement with, “As our industry grapples to attract an evolving, increasingly diverse consumer base, Culture Machine is poised and dedicated to meet that demand.”

Other details about the deal have not been revealed but Aaliyah Jihad is joining Simien as a creative director.