Fundraiser for Shaun King requests assistance to move out of $842,000 New Jersey house

A fundraiser for Shaun King is seeking donations to help move his family out of their New Jersey home after photographs of the house were published online by news outlets.

The controversial activist stated in a social media post that he is being forced to move from the $842,000 property, per a report from Atlanta Black Star. King’s Instagram page has since gone private and his Twitter profile was taken down.

An image of King’s home was first published by The New York Post, who in late July reported that the 3,000-square-foot abode is located in North Brunswick, New Jersey. The house includes five bedrooms, four bathrooms and a gourmet kitchen with a backyard situated on a lakefront. It was purchased in November in the name of Rai-Tonicia King, Shau King’s wife, according to the outlet.

King, his wife and their five children previously lived in an apartment in Brooklyn, New York, before moving to the New Brunswick home. 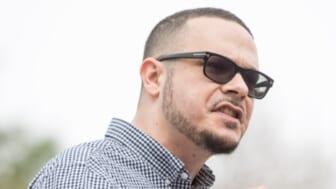 King posted to his social media that for safety reasons, he decided to move out of the New Jersey house, Atlanta Black Star reported.

“Today, I’ve had to make a heartbreaking decision,” King stated. “After a combination of Fox News, the NY Post, and other outlets posted pictures of my home across the Internet, we’ve now seen our address posted all over the internet. Strangers have already started coming by the house. My kids can’t even go outside and play during the final month of summer break. So, we’re moving.”

S. Lee Merritt, a civil rights lawyer and friend to King, is also asking his social media followers for financial assistance to help King move out of the house.

King, who proclaims himself to be an advocate for Black social justice, has been criticized frequently over the years over allegations of using his stance as an ally of Black Lives Matter as a method of monetary and social exploitation.

Numerous publications and critics had previously called into question the methods of how King was able to purchase the house in the first place. News of his planned relocation come on the heels of ridcule earlier this year from Samaria Rice.

In June, Rice, the mother of Tamir Rice, the 12-year-old boy who was slain by police gun fire in 2014, called out King in an Instagram post for publicly disclosing a private conversation between the two, as previously reported by theGrio.

Rice referred to King as “a white man acting Black” and called him an “imposter.”

“Personally, I don’t understand how you sleep at night I never gave you permission to raise anything,” Rice said on social meida. “Along with the United States, you robbed me for the death of my son.”

While King stated that his wife, who is purusing a PhD, purchased the house with the help of an FHA loan, Black Enterprise reported that King had asked his followers to send money to his Rai-Tonicia King via CashApp and Venmo on his Facebook page to “alleviate some pressure” from her as she finishes school.

At the time of King’s post about his wife, he had been vacationing in the Caribbean with his family, the outlet said.