The proud new mom explained that her baby's first name means "pleasant one."

“Marcus and I are so happy to announce that the Naomi Angelina Richardson arrived bright and early on Monday morning perfectly happy, healthy and ready to eat,” Phillip told the outlet. “Mom and baby are feeling great.” 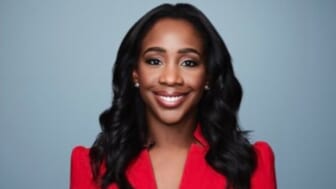 Phillip explained that her baby’s first name means ‘pleasant one’ and her bundle of joy “is already living up to it and spoiling her mom and dad as a blissfully calm baby,” she added.

“Her middle name Angelina is a tribute to my beloved maternal grandmother who passed away in 2014,” she continued.

Phillip shared news of her pregnancy during a sit-down interview with Gayle King for The Cut’s March 2021 cover.

“It has only made me become more in awe of what we as women are able to endure. It was tough: battling morning sickness while balancing a demanding job. But it has been a reminder of what I am capable of — and what so many women do every day,” Phillip, 32, said in the profile.

At the time, Phillip noted on Instagram that the photoshoot for The Cut feature was conducted while she was four months pregnant.

“[We] are having a baby girl this summer! I shot this cover when I was 4 months pregnant and I can’t wait to be able to tell my baby girl that she was on the cover of a magazine … ??? there are just no words,” Phillip captioned her post.

Phillip and Richardson wed on May 26, 2018, and have been together for a decade. They share their Washington, D.C. home with their dog, Booker T. 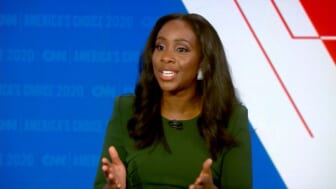 She told King, whom she honored as someone she “looks up to,” about the close bond she had with her husband. He’s been supportive of her career, which is often volatile given the political environment.

“Look, if you’re in this business, you can’t do it without someone who is flexible, because your life is just a mess,” Phillip told King. “It’s unpredictable, it’s busy, it’s ever-changing. And he’s just always like, ‘What do you need? How can I help you?’ I remember one of our first dates — we were supposed to meet up and I left my wallet at home and I was an hour and a half late. He just waited and wasn’t pissed off. I swear to God, I knew then.”

A political correspondent on the network, Phillip spent much of last year covering the 2020 presidential election. She quickly went viral on social media with her sharp political commentary while viewers awaited the results of the election.

The New York Times covered Phillip and her success on the news network. In the interview, she opened up about covering politics in the Trump years.

“In some ways, Donald Trump has made a lot of reporters better reporters … the relentless fact-checking you have to do with this president is unlike anything I have experienced before,” she said. “It has done away with the practice of giving figures in Washington the benefit of the doubt when it comes to truthfulness, and that’s OK, in a bipartisan way.”

During her viral remarks on CNN coverage of the 2020 election, Phillip said, “Donald Trump’s political career began with the racist birther lie, it may very well end with a Black woman in the White House.”

How right she was with that statement, as former senator Kamala Harris became the nation’s first female of color vice president following Trump’s ouster.