'The Real Housewives of Atlanta' alums are set to join Dorinda Medley, Brandi Glanville, and more

However, according to new reports, another Real Housewives spin-off is set to premiere on the streaming service, Peacock, this time with fan-favorites Phaedra Parks and Eva Marcille of The Real Housewives of Atlanta.

The new mash-up series is set to start filming this fall for Peacock and it will feature some Housewives of seasons past for fans to reunite with, according to Page Six. 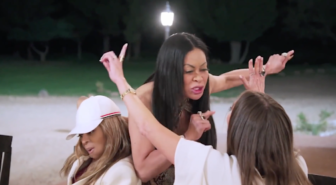 Cast around The Real Housewives of New York City alum Dorinda Medley, this new series will feature a group of former housewives spending “the week together”. The series will be a cross-franchise event, bringing together housewives from New York, Beverly Hills, Orange County, and of course, Atlanta.

“Viewers love Dorinda and we thought it would be great to have her star in a new show that brings her together with past favorites from other franchises,” a source reportedly told The Daily Mail.

One of the reported cast members is Phaedra Parks of Atlanta. The fan-favorite infamously left the show in season 9, after a dramatic reunion in which it was revealed she perpetuated a rumor that her co-star, Kandi Buruss, planned to drug and rape fellow co-star Porsha Williams. Parks recently appeared on an episode of Watch What Happens Live! with Andy Cohen, in which she spilled plenty of tea and gave her thoughts on the current cast.

Eva Marcille of Atlanta is also rumored to be joining the cast. Marcille appeared on The Real Housewives of Atlanta for three seasons and is currently the star of the upcoming BET + show, All the Queen’s Men.

Rounding out the cast is Taylor Armstrong and Brandi Glanville of Beverly Hills, Jill Zarin of New York, and the “OG of the OC,” Vicki Gunvalson. “No doubt the drinks will flow and drama will ensue as the women spend a week together…each one of these women is television gold, and they are all Bravo fan favorites,” the source told Daily Mail.

This is not the first mash-up series fans have to look forward to. As Entertainment Tonight previously reported, seven housewives went on a lavish trip to Turks and Caicos earlier this year, featuring many “All-Star” Real Housewives filming together for one week. The cast includes Kenya Moore and Cynthia Bailey of Atlanta, Teresa Giudice and Melissa Gorga of New Jersey, Kyle Richards of Beverly Hills, and Luann de Lesseps and Ramona Singer of New York. A release date has yet to be announced for the highly-anticipated spin-off.