OPINION: Elder’s positions are typical right-wing mumbo jumbo that you’d hear from Fox News, but of course, it’s all the more pernicious when it comes from a Black mouth 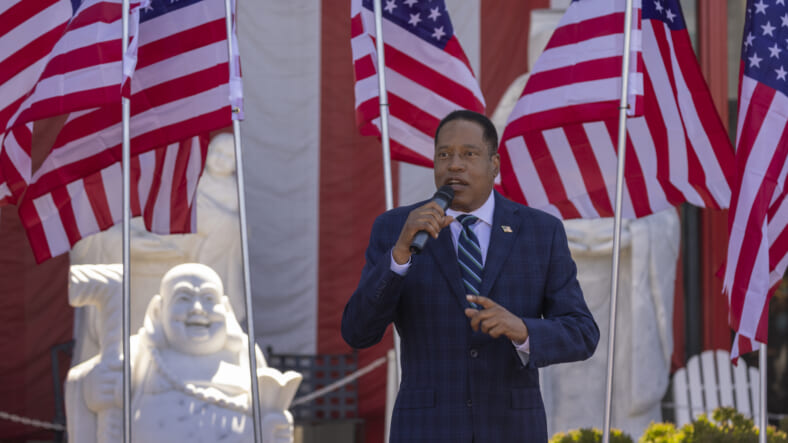 WESTMINSTER, CA – SEPTEMBER 04: Republican recall candidate Larry Elder addresses the “Asian Rally for Yes on Recall” at the Asian Garden Mall on September 4, 2021 in Westminster, California. The Conservative talk show host is the Republican front-runner in the race to overthrow the governor in this years special recall election on September 14, ahead of next years regularly scheduled gubernatorial vote. Westminster is known for its predominantly Vietnamese population. (Photo by David McNew/Getty Images)

The list of Negroes we don’t need has grown one name longer with the addition of California governor hopeful Larry Elder. He’s been on the list for a long time — he’s been a conservative loudmouth radio host for decades, but when he was just ranting on the radio he didn’t really matter. Now that Elder is a contender in the California governor’s race, it matters a lot.

It’s like the way Trump’s disgusting politics meant nothing when he was a New York tabloid gadfly, but when he became a leader in the 2016 Republican presidential primary things got really real.

So now it’s time to shine a little light on Larry Elder, a soldier for white supremacy. 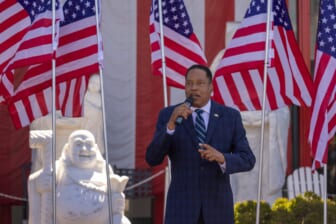 Elder is, like so many Republicans, espousing a heartless, anti-Black agenda that would be devastating for millions of Black people. That agenda relies on the notion that Black people are lazy and without character and that the poor’s biggest problem is help from the state. The reality is that Black poverty stems from generations of white supremacy, wage theft, a paucity of intergenerational transfers, a system that often blocks Black people from homeownership, mass incarceration, the destruction of unions, the failure to raise minimum wage, and more.

But in outrage-loving right-wing radio and TV it’s easier and more seductive to say the coloreds are lazy and government gives them too much. None of this would work without generations of American heartlessness toward Black people. None of this would work if so many white people weren’t willing to blame Black problems on Black people. But generations of racist ideas prop up today’s policies so you don’t have to say the n-word; all you have to do is attack the safety net, and the right knows what you’re really talking about. On the right, the safety net itself is the problem, as if government doesn’t have a role to play in helping and defending the least powerful.

Elder’s vision of the future is a nightmarish picture of government completely abandoning poor people. He says he would eliminate minimum wage (leaving workers to be paid as little as possible), and public welfare (no help for the needy at all), and state-run health insurance (if you get sick and can’t pay, too bad). That would lead to millions of people with absolutely no money and no way to help themselves if they get injured or ill, which could exacerbate their financial problems or end their lives.

The only way you can push for these ideas is if you don’t care about Black people. Elder also believes he should pick judges in the mold of Clarence Thomas, and end gun control, and he blames George Floyd’s death on Barack Obama because, Elder says, Obama should have encouraged Black people to comply. Floyd was complying and many others never had a chance to comply — Breonna Taylor, Tamir Rice, Aiyanna Jones, Philando Castile — but who needs facts when you’re selling an ideas that are rooted in racist stereotypes? 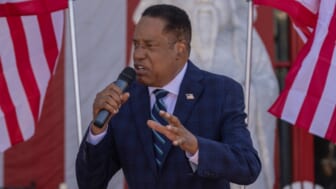 Elder’s positions are typical right-wing mumbo jumbo that you’d hear from Fox News’s Sean Hannity or Tucker Carlson, but of course, it’s all the more pernicious when it comes from a Black mouth. When a Black person says these things it helps white people think it’s not racist to fight for removing the safety net because if a Black person is for it then how can it be racist? One problem with that equation is the notion that Black people can’t be racist.

Larry Elder is one of those Blacks whose work is purposely and immensely beneficial to white supremacy. He is helping white supremacy thrive by giving comfort to racists and helping them place the blame for poverty on Black people rather than generations of systems and policies that have abandoned them.

I would say that Larry Elder must be stopped, but in the wake of Trump we will see an increasingly insane group of people moving from right-wing media into politics. Only they can satisfy the right’s growing appetite for more outrage, more crazy, more detached from reality pronouncements, and, of course, more hatred toward Black and brown people. Larry Elder is just one of a trend. I can’t wait to see what else the Republicans drudge up from the bottom of their swamp.