Why do women like Chlöe Bailey and Lizzo really piss y’all off so much?

OPINION: Blue Telusma writes that so many have been brainwashed by respectability politics that any woman who has freed herself from its shackles feels like an assault to the sensibilities.

This weekend the force of nature known as Chlöe Bailey snatched the wigs off everyone with wifi via her first performance of her debut single, “Have Mercy,” during the 2021 MTV Video Music Awards. Mind you, this was just days after we recovered from her debut of the song’s video which had us equally in shambles.

It’s clear as day that Sunday evening we all watched a star being birthed right before our eyes for the entire mainstream (i.e white) media to see and “discover” as their new “it girl”, despite the fact that most Black people who listen to popular music have been aware of her for years.

And this should have been a good thing right? Any time a Black woman finally gets her flowers we should all be rejoicing that one of our own who worked twice as hard, is finally getting her overdue “half as much.” 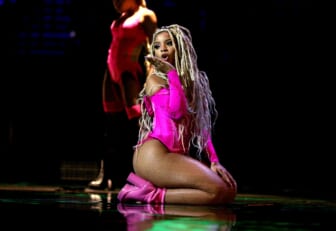 However, I can’t help noting that as Chlöe strutted her hot pink-clad melanated body across that glossy VMA stage, instead of being ecstatic, some of you were still rolling your eyes and calling her “desperate for attention” — despite the fact that her job as an entertainer is LITERALLY to get our attention.

And if we’re keeping it real here, we all know the reason why little sis has so many vocal haters determined to chin check her as she makes her ascension:

Ya’ll love the magic generated by Black women, but you hate to see us actually take ownership of it.

As a matter of FACT (as opposed to opinion): Black women’s talent, style, aesthetics, and intellectual property makes the media world go round. But God forbid if one of us actually has the nerve to pull a “she think she cute” even as you pick at that same cuteness and use it as the secret sauce to make everything else more marketable.

What Chlöe is going through is honestly no different from the very same backlash that our other good sis Lizzo receives.

And before you say, “Blue, in what world do Chlöe and Lizzo have anything in common?” I need you to hear me out and step away from being distracted by surface-level optics. 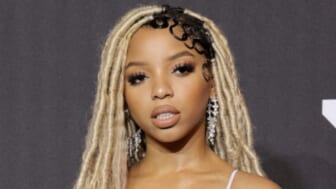 While Lizzo is a plus-sized woman in her 30’s and Chlöe is a plump bootied chanteuse in her early 20s, these two women are equally bogged down by the lose-lose double whammy of racism and misogyny.

In pop culture, female entertainers are meant to be objects of desire and the keyword here is object. They have to look perfect, perform perfectly and damn near be perfect so that the male gaze can admire them without feeling threatened and female fans can feel inadequate enough to idolize them and buy their products.

As if that wasn’t an impossible enough set of metrics to live up to, then you throw in Blackness and things get even more problematic. In addition to dealing with the baked-in misogyny of the music industry, BLACK female entertainers also have to contend with racist beauty standards that are steeped in anti-Blackness and fatphobia.

We — as those who are both women and Black — are seen as characters, one-dimensional hoodrats, and tokens who should be happy we’re even let on the stage as anything more than backup performers.

Black women in this industry have to be Black enough to have street cred and not alienate their community, but not be too Black and scare off the whites. They have to simultaneously have a fat booty, a size zero body, sing better than Aretha Franklin, dance as fluidly as the Holy Ghost, give back to “the culture,” not be political, but also be “woke” enough not to be a sellout, be mysterious, while also being “down to earth” with their fanbases, crank out hits that their white counterparts can jump on the remix for (before stealing their sound altogether), say funny sassy things on social media – without offending anyone, and IF they can pull all of that off….

THEN we ask them to also “be humble” because God forbid they have the nerve to be proud of themselves, their work, or their bodies while mastering that impossible tight rope of expectations right?

God forbid they take a break from the unavoidable insecurity that comes from being in the limelight and actually let themselves feel pretty, sexy, or confident on the ‘Gram right?

God forbid any human unlucky enough to be both Black and woman have the nerve to like herself without apology in front of yall.

Because then she will be called “desperate,” “thirsty,” “fat,” “crazy,” or any of the other words y’all like to throw at these girls who are quite literally just trying to make their dreams come true.

You guys hate Chlöe Bailey for growing up and even pretending for a second to be comfortable in her womanhood. You hate Lizzo for being overweight and having the nerve to know she’s still pretty and worthy. You hate Normani for being so damn talented but not light enough to appease the mainstream who prefers “ambiguously Black” megastars, you hate Cardi B for being too ghetto and speaking like where she’s from despite the fact that she outworks a lot of you speaking the King’s English, and the list goes on and on.

The world simply isn’t built for Black women to have free agency. The system is rigged for everyone to see, profit, and repackage our power while finding peace in knowing we’ll never fully own it.

It’s a tale as old as time and a song as old as slavery.

But these young girls are flipping the script on you now and it makes you scared doesn’t it? And I get it. There are billion-dollar industries that depend on Black women not knowing their value. Advertisers literally market the concept of lack so we can buy their products to feel more whole. Record execs make their bread and butter selling fantasies that can never be achieved by the average mortal.

So in that sort of ecosystem, one could argue a confidant woman, especially a confidant Black woman who understands the true breadth and scope of her worth, is probably the most dangerous thing on the planet.

And that’s, why y’all, are REALLY mad. And by ya’ll I don’t just mean the powers that be. The Black viewing audience has some explaining to do as well. So many of you have been so brainwashed by respectability politics that any woman who looks like you who has also freed herself from its shackles feels like an assault to your own sensibilities.

The mere presence of women who take up space like Chlöe and Lizzo makes the rest of us have to stop and ask, “Well if she’s allowed to show up that free, who convinced me I wasn’t allowed to do the same?”

And I suspect a lot of you aren’t quite ready to sit with the answers to those questions. So instead, you sit behind your keyboards and try to make those women cry, hoping to make them feel as disempowered as you do.

And frankly, it’s wack AF. And says more about us as a community than it does about them.

I hope Chlöe Bailey, Lizzo, and all the sistas like them go on to piss y’all off for many years to come.