The former co-host of 'The View' accused the rapper of spreading "unimaginable vaccine hesitancy to your fans."

Meghan McCain says she is now rocking with #TeamCardi after Nicki Minaj shared a story about a family friend’s testicles swelling up due to the COVID vaccine.

“That’s enough internet for today,” McCain tweeted in response to Nicki’s wild tale. The hip-hop star told fans about the Met Gala’s vaccination requirement about an hour after revealing she would not be attending Monday’s event, theGrio previously reported. 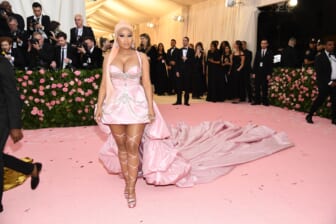 Minaj wrote to her 22 million Twitter followers, “They want you to get vaccinated for the Met. if I get vaccinated it won’t [be] for the Met. It’ll be once I feel I’ve done enough research. I’m working on that now. In the meantime my loves, be safe. Wear the mask with 2 strings that grips your head & face. Not that loose one.”

She continued to tweet about the vaccine on Monday evening, eventually detailing a story about her cousin’s friend who got the vaccine jab. She wrote, “My cousin in Trinidad won’t get the vaccine cuz his friend got it & became impotent. His testicles became swollen. His friend was weeks away from getting married, now the girl called off the wedding. So just pray on it & make sure you’re comfortable with ur decision, not bullied.”

McCain said she would “definitely watch an interview with Nicki Minaj’s cousins friend with the alleged swollen vaccine testicles. I would appreciate a good journalist tracking him down,” she tweeted.

In a follow-up post, McCain added, “In all seriousness, I, my husband and entire family are all vaccinated. I had questions and was lucky enough to talk to  @ashishkjha who answered everything. Please rely on doctors and scientist and not celebrities. My friends uncle just died of covid last week (unvaccinated).”

Minaj clapped back by telling McCain to simply “eat sh*t,” to which the former The View co-host responded: “You have an enormous platform and have just spread unimaginable vaccine hesitancy to your fans. Not only is it deeply irresponsible, it is very sad,” McCain tweeted.

“I hope you talk to doctors and scientists like @ashishkjha like I did eventually. People are still dying from covid,” she added and declared she was “Team Cardi.”

The “Queen” rapper also took aim at Joy Reid who slammed Nicki for spreading “misinformation” to her fans. Nicki responded by tweeting a link to Reid’s video with the caption: “The two white men sittin there nodding their heads cuz this uncle tomiana doing the work chile. How sad.”

In a separate tweet, Minaj shared the headlines of three mainstream media articles that misquoted her as part of the pro-vaccine propaganda.

“3 lies in a row from huge news platforms. I cited my young child as why I didn’t want to travel. But notice how NONE of them mentioned that? Ask yourself why that was,” she captioned the post.

Ashley Winter, MD, a board-certified urologist, wrote in a response to Minaj, “I AM A BOARD CERTIFIED UROLOGIST. The vaccine does not cause orchitis (ie swollen balls). Something else caused that. Tons of data that getting COVID does effect semen parameters and might lead to infertility. Vaccines prevent COVID! Misinformation kills.”

Dr. Leana Wen, an emergency physician and public health professor at George Washington University, told PEOPLE that impotency is not a side effect of the COVID-19 vaccines.

“It is just not true that getting the COVID-19 vaccine is associated with infertility in either males or females,” Dr. Wen told the publication.

“In fact, we know that there are actually consequences, if somebody gets COVID-19, in terms of the impact on the male reproductive system,” she said, adding: “There have been studies that have linked scrotal discomfort and low sperm count to having COVID-19. In addition, there has been an association between scrotal swelling and congestion to having COVID-19. So, to emphasize, these are not associated with the vaccine but with the disease.”