The R. Kelly verdict was just, but it doesn’t make it any less complex

OPINION: Writer Touré says that while he takes no joy in watching a Black person go to prison, there are people who are such a danger to society that they need to be locked away

It’s a story that could be too sad, angering and strange, even for Hollywood. If they turned R. Kelly’s life into a movie you wouldn’t believe it.

A boy grows up in the Chicago projects with no money and no father. He’s sexually abused first by an adult female relative and then again by the hands of an adult male close to his family. Yet as his once-in-a-generation talent as a singer-songwriter emerges he becomes a gigantic star, one of the central stars of his generation. Meanwhile, his immense fame and success facilitate him becoming a predator. He feels entitled to have anything and anyone he wants, and even though there are legions of adults who will sleep with him, he chooses to have sex with a slew of teenagers, female and male, doing to others what was done to him.

At trial he is convicted on all counts. The man who made hundreds of millions and lived like a king will probably spend the last decades of his life in federal prison.

I knew R. Kelly had a hunger for young girls when, years ago, I asked him point blank, “Do you like teenage girls?” and he did not immediately say, ‘No, that’s disgusting.’ Instead his face registered a glimmer of excitement at the mere mention of teenage girls. I knew it when women who grew up in Chicago told me that R. Kelly would regularly pull up to the local high schools during recess — many said he always seemed to know when recess was— and chat with 9th grade girls to see who was willing to come to his studio.

We all should have known it when it became news that he had married a rising singing star named Aaliyah when she was only 15 and he was 27. How is that OK?

I never feel joy watching a Black person go to prison because prison as an institution has been so horrible and unjust and immoral to Black people, but sometimes there are people who are or have been such a danger to society that we need them to be locked away. If anyone should go to prison, R. Kelly is among them.

R. Kelly raped Aaliyah. For so many of us who have loved Black culture over the past several decades, Aaliyah was a stand-out star — people worshipped her and called her an angel and loved her music and mourned her death. He also raped several other girls after aggressively chasing and grooming them. He also molested boys and physically beat adult women. R. Kelly felt his fame and success meant he could do anything he wanted. He was a pedophile who used his fame and largesse to lure in women who were far too young for him.

Also Read:
R. Kelly’s attraction to underage girls was on the surface for years — I know because I asked him

The story of R. Kelly is full of complexity — he’s one of the great songwriters of his era, someone who wrote tons of popular songs in a variety of styles, but especially R&B at which he was a master. There is a tradition in Black music of blending the spirit and tropes of R&B and gospel in a way that exposes the proximity of the sacred and the profane — the spiritual closeness of Saturday night and Sunday morning. That tradition, which marked the epic careers of Marvin Gaye, the Rev. Al Green, Aretha Franklin, and many others, is a lane that R. Kelly trod as well.

He wrote songs that pushed the boundaries of modern songwriting form like “Trapped In the Closet.” And yet, according to his attorneys and multiple reports, he is illiterate; an adult who cannot read or write. R. Kelly seems like a savant who is hyper-developed in one narrow form of intelligence and yet tragically underdeveloped in other forms. He’s full of contradictions. He’s a sexual monster and you would be right to fear sending your 14 or 15 year-old daughter or sister or cousin to his concerts or, worse, to visit him at his studio. And yet he is the man behind one of the most inspiring pop gospel anthems in recent decades as millions drew strength from his biggest commercial success “I Believe I Can Fly.”

Many sexual abusers were, themselves, sexually abused. Hurt people hurt people. Kelly was let down by his family and his community when multiple people were allowed to molest him and his shame around being molested kept him from speaking his truth. That began the birth of this monster. But the world enabled Kelly and let down his victims by continuing to celebrate him even when the signs were right in front of us. 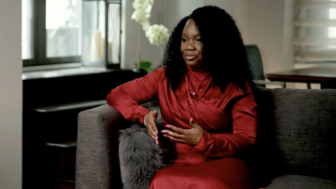 The music industry rallied to clean up the mess and protect the golden goose. My famous BET interview with R. Kelly where I asked him if he liked teenage girls aired on the network just one time. It got huge ratings but after it aired, Kelly’s team called BET and demanded it not be aired again –and BET immediately capitulated. The network shelved the interview and went right back to playing his videos. They weren’t rooting for everybody Black when they protected Kelly over his victims.

This isn’t to attack BET specifically — they protected the money maker just like so many other institutions did. BET, like his label, the music streamers, and others stood by him even though the signs were right in front of us. I take no joy in watching a Black man go to prison and I will not participate in making or spreading jokes, but Kelly has hurt so many people for so long it’s clear that this is just.