The series also stars Trevante Rhodes as the famed boxer himself

The cast of the Mike Tyson Hulu series continues to get ironed out. Per a new report from Variety, Russell Hornsby is set to star as Don King in Iron Mike, a “notorious” boxing promoter.

Iron Mike is an eight-episode limited series coming to Hulu focused on the life of Tyson, theGrio previously reported. From the creators of the award-winning biopic on Tonya Harding, I, Tonya, the series is said to “explore the wild, tragic and controversial life” while referring to him as “one of the most polarizing figures in sports culture.”

Now, it seems Hulu has found their Don King for the highly anticipated series. 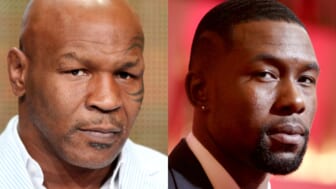 With production currently underway, the series stars Trevante Rhodes of Moonlight fame as the lead role of Tyson. Hornsby joins as King, who Variety describes as “ruthlessly ambitious with a flashy personality. He is a notorious boxing promoter that takes Tyson’s boxing career to the next level. He’s a businessman; strategic, resilient, knowing how to work everything in his favor. However, much of his arrogance might be hiding a deeper vulnerability. While others may focus on the little details, King has his eyes on the prize – always thinking of the bigger picture.”

In real life, King made his name by promoting fights for Muhammad Ali, including “Rumble in the Jungle” and the “Thrilla in Manila.” Variety describes his legacy as somewhat controversial, as he has “been the subject of numerous lawsuits by boxers he represented over claims he withheld money from them during their careers.”

Hornsby took to Instagram on Tuesday to celebrate his new role, while also mentioning his new series on Starz, BMF. He wrote in his caption, “What a week… “BMF” premiered on STARZ, and I want to thank Variety for this announcement. Stay tuned for Hulu’s newest series “Iron Mike” 🥊🎬 #hulu#ironmike#variety#bmf#starz

While fans are plenty excited for the upcoming series, Tyson himself has not given his blessing for the limited series, in fact, he gave the opposite. As theGrio previously reported, he shared in a statement to The Hollywood Reporter earlier this year, “Hulu’s announcement to do an unauthorized miniseries of my life, although unfortunate, isn’t surprising. This announcement on the heels of social disparities in our country is a prime example of how Hulu’s corporate greed led to this tone-deaf cultural misappropriation of my life story.”

Also Read:
EXCLUSIVE: “The Hate U Give” actor Russell Hornsby has a special message about Black fathers

He added, “to make this announcement during Black History Month only confirms Hulu’s concern for dollars over respect for Black story rights.” He then called for Hollywood to take a hard look at how they approach Black stories, explaining, “Hollywood needs to be more sensitive to Black experiences especially after all that has transpired in 2020. My authorized story is in development and will be announced in coming days.”