On Thursday, California Governor Gavin Newsom, a Democrat, signed into law a series of police reform bills that aim to strip badges from officers accused of misconduct.

A press release notes that he also “signed legislation strengthening policing responsibility and accountability guidelines, raising eligibility standards, and banning harmful techniques such as chokeholds and the use of rubber bullets and beanbag rounds at protests.” 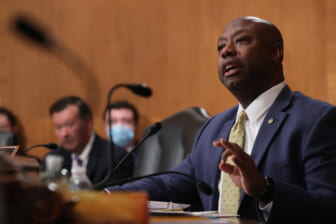 “Today marks another step toward healing and justice for all,” said Governor Newsom. “Too many lives have been lost due to racial profiling and excessive use of force. We cannot change what is past, but we can build accountability, root out racial injustice and fight systemic racism. We are all indebted to the families who have persevered through their grief to continue this fight and work toward a more just future.”

State Sen. Steven Bradford, a Democrat who authored the bill, said it aims to hold “bad officers accountable for their misconduct.”

“California has one of the most progressive criminal justice systems in the nation,” said Senator Bradford. “But for too long, problematic officers that commit heinous acts in one department are either not held accountable and continue to be a problem for that community, or are punished, but able to find employment in another department. This rinse and repeat style of accountability has led to the continuous erosion of community trust.

“At long last, California finally joins the 46 other states with processes for the decertification of bad officers. I’m proud to have authored this landmark bill for California, which honors Kenneth Ross Jr. and the many others who have had their lives taken by police who abuse their power,” he continued.

The governor and legislators were joined at Thursday’s bill signing by parents of victims of fatal encounters with police.

Per the press release, Gov. Newsom also signed AB 26 by Assemblymember Chris Holden (D-Pasadena) which requires officers to “intercede and immediately report if another officer is using excessive force.”

The state’s sweeping police reforms come a week after the bipartisan push for federal police reform in the aftermath of George Floyd’s murder collapsed in Congress, theGRIO reported.

However, sources told CBS News that the talks were abandoned.

“Unfortunately, even with this law enforcement support and further compromises we offered, there was still too wide a gulf with our negotiating partners and we faced significant obstacles to securing a bipartisan deal,” Sen. Booker said in a statement.

Booker added that there was no “meaningful progress,” on the most critical matters. 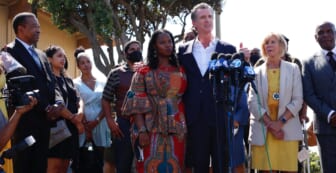 “Americans across the country took to the streets this summer rightfully demanding more and better of our criminal justice system – and of ourselves,” said Gov. Newsom in a statement at the time. “We heard those calls for action loud and clear and today are advancing reforms to improve policing practices by ending the carotid hold and requiring independent investigations in officer-involved shootings.”