The Republican senator, with the help of two Democratic members of Congress, has worked on bipartisan police reform legislation in recent months

Scott, the nation’s lone Black Republican senator, has worked with Democratic Sen. Cory Booker and Rep. Karen Bass in recent months on bipartisan legislation to overhaul policing practices in the U.S., but Scott said he draws the line at reducing funding.

“We said simply this: ‘I’m not going to participate in reducing funding for the police after we saw a major city after major city defund the police,’” Scott said Friday during an appearance on CBS’s Face the Nation.

“Many provisions in this bill that [Democrats] wanted me to agree to limited or reduced funding for the police,” he continued.

Booker, during an appearance on NBC’s Meet the Press, declined to engage in a verbal back-and-forth on the matter.

“I love him,” Booker said about Scott. “I send him grace all the time, he is a friend of mine … I promised the families [of police brutality victims] we’re going to get something done. I’m still at work. I’m not throwing accusations at either side.”

Despite their political differences, Scott, Booker and Bass, all of them Black, began conceptualizing a series of changes to national policing procedures following the murders of George Floyd, Breonna Taylor and others at the hands of law enforcement officers in 2020.

Also ensuing from the string of police murders was a tidal wave of worldwide protests affiliated with the Black Lives Matter Movement, promoting, among other things, meaningful police accountability and reform action.

Many advocates of the movement have demanded that police funding be reduced in order to commit more money towards community care networks that could mitigate the systemic factors that push many towards crime in the first place.

Simplified into the slogan “defund the police,” the core message of the phrase was perceived differently among different social and political groups, with Republicans assuming that Democrats intended to threaten law and order.

A document detailing Booker’s “minimum requirements” for police reform was obtained by CBS. The list of stipulations reportedly included bans and no-knock warrants, used in Taylor’s murder, as well as chokeholds, which were used in the murder of Eric Garner in 2014. 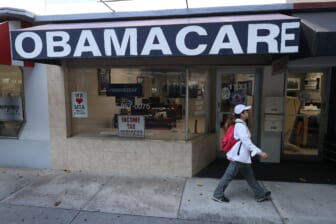 According to CBS, the document also detailed a series of reforms police departments would be required to make before applying for grant money from certain programs, which Scott said is the same thing as defunding them.

“We have about a billion dollars in grant money that goes to police,” Scott said, speaking to CBS. “When you start saying, ‘In order to receive those dollars, you must do A, B and C. And if you don’t do a B and C, you literally lose eligibility for the two major pots of money … when you tell local law enforcement agencies that you are ineligible for money, that’s defunding the police, there’s no way to spin that.”

“I’m only saying that if you read the legislation, it’s pretty simple,” he continued. “This is not something that I’m making up, and we can debate our facts. We can actually say, in several different areas of the bill, it reduces funding.”

Booker disputed Scott’s claims that Democrats’ demands were attempts to defund the police during an interview on CNN’s State of the Union.

Booker reasoned that former President Donald Trump “passed an executive order [on policing] that actually had some good parts to it like creating national accreditation standards … Donald Trump himself said, ‘If you want federal dollars, you’re going to have to comply with raising professional standards.’”

“But we couldn’t even get agreement to memorialize what is already the law of the land via executive order,” he continued.

Bass recently appealed to the Biden administration on Thursday, to “use the full extent of their constitutionally mandated power to bring about meaningful police reform”.

“President Biden is very connected to these negotiations in terms of watching what was happening. We talked about things we can do with executive orders,” Booker said.