“There’s nothing that we can’t do, honey," said Brown

Brown’s book, Feeding the Soul (Because It’s My Business): Finding Our Way to Joy, Love, and Freedom did not just make the list, but reached No. 1.

In a video shared on Instagram, Brown was overcome with emotion as she made the announcement to her fans and supporters. “You know how sometimes you do stuff and you do it with no expectation? And then God just blows your mind! That’s the moment I’m in, honey.”

“I’m still kind of in a moment of shock,” she said. “I don’t even know what to say. Thank y’all for buying my book, and for supporting me, and for telling people about me. I’m so thankful. I can’t even believe my life right now, y’all. It’s just a long time coming.”

The vegan guru continued, “I’m doing a lot of new things I never thought I would do.”

The 42-year-old actress and author said, “There’s nothing that we can’t do, honey. If we just do it and we believe it, and we have faith in it, and God will do the rest. If He put it in our heart and in our mind, we are supposed to do something with it. Whatever your dream is, honey, if you think it’s too big, dream a little bit bigger because there’s more out there waiting for you.”

With a smile, she added that she planned to call her father. 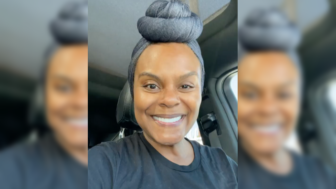 Also Read:
Tabitha Brown explains how ALS preventing mom from smiling is why she’s so ‘happy’

Known for her warm Southern spirit, Brown emerged from TikTok, YouTube and Facebook videos about her vegan recipes. Since then, she has written her book, been a guest on the Showtime series, The Chi, and released a best-selling spice blend with McCormick.

Talk show host, Wendy Williams criticized Brown’s decision to help her husband financially, comparing Chance Brown to her ex-husband Kevin Hunter. “I was married to one of those, ‘I make the money!’ and so on and so forth. ‘Go live your dreams! Open a business! Go, go, go!’ See how that turned out…I predict that this marriage is going to be on real rocky ground in a moment. ‘Live your dream’… They may invest in stuff and lose the money.”

“They invest in something else then the money gets swindled or stolen. Then they invest again and he comes home and throws his bag down. She’s like ‘What? What?’ And he’s like, ‘I can’t do this and this is your fault. You’re over here making your money and stuff and had me quit my job.’ ”

“I pray that somebody loves you enough to sacrifice their life for you. I pray that type of love finds you so that you can understand why I don’t want my husband to put his life on the line anymore, wearing a bulletproof vest if he don’t have to, and if it’s not his desire.”