EXCLUSIVE: The 59-year-old son of late stand-up comedian Richard Pryor spoke with TheGrio about contracting COVID multiple times, how the shutdown affected his income and what he hopes he can do to help others.

The name Richard Pryor is synonymous with triumph, struggle, and survival. We came to know the name via the groundbreaking comedian who became the prototype for all stand-ups who came after him.

For his namesake, Richard Pryor Jr., life has been difficult, but he has made it through. However, the actor/singer/performer has fallen on hard times, like most, due to the COVID-19 pandemic. So much so, that a friend has created a crowdfunding campaign via GoFundMe as an effort to assist Pryor.

Pryor spoke with TheGrio to explain his current uphill battle.

Like his father, Richard Jr. has made a living as a performer, acting in films, singing on stage and at cabarets. However, when COVID-19 struck, movie sets and theaters went dark, leaving Pryor without work like so many other working performers. “March of 2020, that’s when everything shut down. That’s the last time I performed,” Pryor told TheGrio.

With the loss of income from his film appearances and stage gigs, Pryor was forced to find alternative work like many in the arts.

“What I did is, I started doing a temporary job when everything shut down wasn’t performing and all that stuff; working at a hospital, doing housekeeping,” Pryor said. He went to work at the Henry J. Carter Specialty Hospital and Nursing Facility in Harlem, where he’s lived for the past three years.

While working with and near COVID-19 patients who were coming off respirators, Pryor would, himself, contract COVID-19 — on three different occasions.

To compound matters, Pryor hasn’t been working at the hospital since July 19 after aggravating a lingering back injury. As he awaits paperwork processing for worker’s comp, he hasn’t been able to pay any bills. So, a friend, Eric Harrison, has stepped up to create a GoFundMe page to help with Pryor’s bills and medical expenses.

“Not being able to return to his job, not able to preform on stage, and his on-going chronic back pain has unfortunately set him behind and pumped the breaks on past, present, and future opportunities,” wrote Harrison. “Richard would never ask for anything from anyone. So I’m doing it for him!” 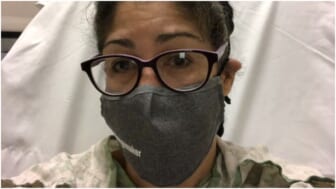 “He asked me, what do I owe? What kind of bills am I behind on,” Pryor recalled of Harrison. The amount Harrison arrived at was based on Pryor’s answers. It added up to $9,500. As of press time, the campaign has surpassed the halfway mark at $5,235.

Pryor accepted the offer from Harrison but didn’t believe people would give due to having a famous lineage. “I said, ‘Well, go ahead. Try,’ I said, but nobody’s going to give because they think I already have everything. And that’s a mindset that a lot of people have because of who My father was, like, you know, I had the silver spoon in my mouth my whole life and everything was handed down to me, and that’s so not true.“

Harrison shared on the GoFundMe page that Richard Jr. is not a part of his father’s estate.

Outside of his financial and physical deficits, Pryor also stated that artistically it’s been “difficult” behind being deprived of the outlet to act and sing during the COVID-19 shutdowns.

“I know performing and acting when you’re on stage and being able to do things, you’re able to come out of yourself are just to be someone else and to let people see you as someone else,” Pryor said. “So I think that aspect of it has been extremely difficult because you don’t have that as an element of formal release, a form of releasing stress.”

Pryor would, however, pivot, and looked to writing as a positive creative outlet while he was able to go back on stage. Already an author with his 2019 memoir, In a Pryor Life, Richard Jr. is working hard to adapt his book into a screenplay and stage play.

“I’m also working on trying to adapt my book into a one-man show, where I would say that to portray the characters in my book,” he said.

With the GoFundMe campaign moving forward, Pryor is hoping that it will allow him to distribute autographed copies of his memoir for fans. Although he first visualized the book to be an account of what children of celebrities go through, Pryor ultimately wrote a memoir on overcoming his personal demons, hoping that it will be an inspiration for others.

“By the time I finished the book, it was about, ‘how can I help some people reduce some darkness in their light? How can I help them to see that we don’t have to stay in the dark,'” Pryor said. “I should have been dead 10 times over and I’m still here. And finding out your purpose, knowing that you’re supposed to be here, to be able to talk to people, to be able to show people that know you don’t have to be like that, it doesn’t have to stay this way.”