Kevin Hart‘s former friend, J.T. Jackson, has been cleared of all criminal charges related to a 2017 sex tape scandal.

Ina video posted on social media, Hart shared an update about the case in a video, in which he admits, “I’m happy that that chapter in my life is over.” 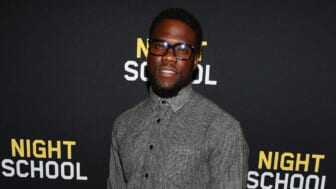 Jackson was accused of setting up a camera in Hart’s Las Vegas hotel room and recording the comedian’s sexual rendezvous with Montia Sabbag, theGrio previously reported.  In 2017, that extramarital affair went public when TMZ reported on what they described as a “graphic” video, posting a photo of the two.

At the time, Hart was framed in the scandal as somewhat of a victim having been double-crossed by a close friend in his inner circle who reportedly tried to extort millions from him.

However, Sabbag said Hart and Jackson colluded to set the whole thing up for personal gain. She sued the Night School star for $60 million in damages, alleging intentional infliction of emotional distress, negligence, and invasion of privacy, according to court documents obtained by PEOPLE. According to TMZ, Hart wants the sex tape case dismissed.

Sabbag claimed in the court docs that Hart allowed Jackson to access the room to set up the video to record their encounter without her knowledge. She said it was all done to help “promote [Hart’s] Irresponsible Tour, which was a record-breaking comedy and to increase his overall pop culture status,” according to the documents.

Hart took to social media to publicly apologize to his wife, Eniko who was pregnant at the time.

“I’m guilty [of infidelity], regardless of how it happened and what was involved, the s– that I can’t talk about, I’m guilty. I’m wrong,” Hart said in an interview with the Power 105.1 FM show The Breakfast Club in December 2017. “It’s beyond irresponsible. There’s no way around it. That’s Kevin Hart in his dumbest moment. That’s not the finest hour of my life. With that being said, you make your bed you lay in it.”

Sabbag made clear that she is “not an extortionist.”

“I had nothing to do with these recordings,” she said at the time.

Jackson was facing charges of attempted extortion, attempted concealing and selling stolen property, unauthorized use of personal ID, and identity theft, per TMZ. The first 3 charges were dropped in 2019, due to insufficient evidence, and now the identity theft charge has been dropped for the same reason, the outlet reports.

Hart took to Instagram recently to address the case.

“Look, it’s no secret that my life has had its share of ups and downs, it definitely has,” he said. “Not proud of the downs at all, but of course, that’s life, things happen – it’s our job to adjust when they do.”

Hart said he was initially unable to talk about the case because of legalities.

“You know they kind of put a fork in the road between he and I, and that relationship was lost. But I’m glad that now not only I can finally speak on it, but I can say I’m happy that that chapter of my life is over. I’m happy that we are able to put a period on that sentence, and I am excited to get back to life as we once knew it.”

On Instagram, Jackson wrote on September 30, “ALL CHARGES DROPPED IN COURT YESTERDAY … ALL PRAISE GOES TO GOD!”

He also thanked his lawyer Jacob Glucksman for representing him “like a true champ,” adding “Thank you for believing in me from the beginning and rocking with a brotha.”

Jackson opened up about his strained relationship with Hart in an interview with Comedy Hype last year, admitting he was “disappointed” with the way Hart handled the issue.

“If you thought that I did something to you and these accusations that they’re accusing, me, your boy for 15 years, you don’t want to sit down and talk to me, brother?” he said.

Adding, “He never, ever sat down and called me on the phone to say, ‘Yo, we need to talk,’ and I just found that odd. You know that’s 15 years, brother, come sit down with me.”