On the lot at 921 Mall Drive West in Lansing, Michigan, used to sit the old Lansing Mall Cinema. It’s sat empty since the theater closed in 2014.

Until now. The plot soon will be the set of Greenwood District Studios, a Black-owned movie studio.

Amaru, a 47-year-old stand-up comic who goes by one name, is currently building the first Black-owned movie studio in the state, as reported by MLive.com. The Kalamazoo, Michigan native stated that the move was inspired by the entertainment work stoppage caused by the COVID-19 pandemic and the murder of George Floyd.

“How can I bring back my job and others some jobs?” Amaru said, the outlet reports. “Hope was the number one thing that came up and doing away with the despair that’s happening around, especially with our youth.”

Another inspiration for Amaru’s ambition to create the studio was working with Master P. One of his first Hollywood projects for the 25-year entertainment industry vet was writing for the music mogul in Los Angeles. Although he was able to make numerous connections, they didn’t pan out most of the time.

“As you’re in the business, you begin to get tired of waiting,” Amaru said. “Waiting for people to follow through is not what I like to do.”

Amaru launched a crowdfunding campaign for the movie studio, according to a press release. He was able to raise his goal amount for Greenwood District Studios via GoFundMe. The studio is named after the Tulsa, Oklahoma Black neighborhood that was dubbed Black Wall Street. The district was burned down during the Tulsa Race Massacre, which reached its 100 anniversary this year.

A small group of staff members and volunteers are helping Amaru and his partner Michael Nathan, a producer and director, remove debris and refurbish the old abandoned movie theater. They are working to replace the broken glass bottles and tattered movie screens with new screens, stages and other updated equipment.

“Good things take time and if you’re willing to sacrifice and work for it, it’ll happen no matter what,” Nathan told MLive.

In September, the first portion of the studio, the Funny is Funny comedy club, had its grand opening. The venue will be a showcase for professional comics on weekends and will host open mic nights for amateurs on Tuesdays. 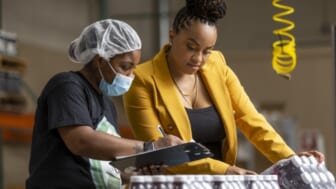 “It may not be about me, it may be about somebody that comes along that I give him an opportunity to blow up,” Amaru said in MLive. “It might be somebody that has yet to come that might be that spark.”

As Funny is Funny opens to the public, construction for the remainder of the studio continues in earnest. Aiming to be complete by 2022, Greenwood District Studios will be home of the comedy club, six film studios, office space and an editing house.

Amaru is not the only comedian who decided to build a Black-owned studio.

Kevin Fredericks, aka KevOnStage, a stand-up comic known from his work on All Def Digital YouTube channel, has built KevOnStage Studios, a streaming app for Black content. Most the content is produced in his studio space in Los Angeles. Daily Show correspondent Roy Wood Jr. in December commended Fredericks for not only building his studio, but for giving fellow comedians and content creators of color a needed platform.

“.@KevOnStage built his own studio space to continue creating content that’ll be distributed on an app he owns cutting out L.A. politics & going direct to consumer all while providing a platform for other deserving comics,” Wood Jr. wrote on Twitter. “How you move forward AND reach back at the same damn time?”

“We want to level the playing field for those people who are marginalized and give them a chance to showcase their talent and also go directly to the audience, as opposed to having someone in traditional Hollywood tell you that it’s not gonna work,” Frederick told HuffPost. “Instead, we’ll make it, put it out and let the audience decide if it’s going to work or not.”