California Rep. Karen Bass had some choice words on lawyer Kevin Gough's remarks about the presence of Black pastors in the courtroom.

Comments made by Kevin Gough, the lawyer representing William “Roddie” Bryan, continue to incense African American leaders, who worry that Bryan and the other two men accused of murdering Georgia jogger Ahmaud Arbery may not get convicted.

“I’ve got nothing personally against Mr. Sharpton … but if we’re starting a precedent where we’re gonna bring high-profile members of the African-American community into the courtroom to sit with the family during the trial in the presence of the jury, I believe that’s intimidating and it’s an attempt to consciously or unconsciously pressure or influence the jury,” Gough reportedly ranted to Superior Court Judge Timothy Walmsley, according to TMZ.

”If their pastor is Al Sharpton right now, that’s fine, but then, that’s it,” Gough continued. “We don’t want any more Black pastors coming in here.”

“I think it’s despicable,” said California Rep. Karen Bass of Gough’s remarks, when asked about the trial in an appearance on CNN’s State of the Union with Jake Tapper over the weekend.

“But when they were selecting the jury, remember, they selected pretty much an all-white jury,” she said. “And then the judge acknowledged that that was a problem and allowed the jury to be seated anyway. So, I think that particular trial is off to a bad start.”

Bass, the former chair of the Congressional Black Caucus, who recently made clear her intention to run for mayor of Los Angeles, added that she is “very concerned” about the outcome of the trial of Bryan, Gregory McMichael and his son Travis McMichael, all of whom are being tried for murder and false imprisonment of 25-year-old Arbery, who was jogging through their neighborhood in Brunswick, Georgia in February 2020. 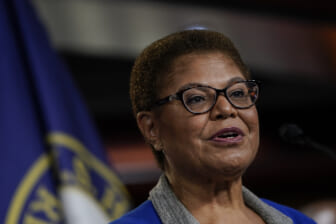 She also voiced her worries about the outcome of the trial of 18-year-old Kyle Rittenhouse, who is accused of murdering two men and wounding another while open-carrying an AR-style rifle during protests in Kenosha, Wisconsin, last year. Rittenhouse has claimed he was at the protests to act as a medic and protect property. However, he has no medical training.

“A year ago, we were talking about racial reckoning, and it seemed to be an enlightened period,” Bass told Tapper, per The Hill.  “And now we have had major setbacks. And I think that people understand that you can use race politically. It charges people up. It’s a highly emotional issue. And I think it’s just really sad.”

She also referred to the trial of Arbery’s accused killers as “a trial of a lynching.” 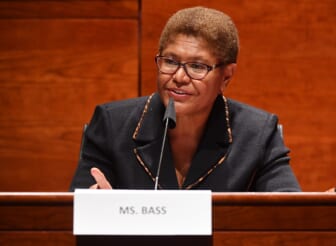 In a statement, Sharpton responded to Gough’s original comments, saying, “The arrogant insensitivity of attorney Kevin Gough in asking a judge to bar me or any minister of the family’s choice underscores the disregard for the value of the human life lost and the grieving of a family in need spiritual and community support.”

Gough has since apologized for his remarks, saying before testimony began last Friday, “My apologies to anyone who might have inadvertently been offended.”

11Alive, a local Georgia station, reported that 50 minutes after testimony began Monday morning, the Rev. Jesse Jackson had arrived to sit with the Arbery family.