"We may reach out to him and see if he'd be interested in helping the country in additional ways," Gaetz told Newsmax.

“Thank you for your advocacy for Kyle Rittenhouse,” the Florida congressman told show host Grant Stinchfield, according to Mediaite. “He is not guilty. He deserves a not guilty verdict, and I sure hope he gets it because you know what? Kyle Rittenhouse would probably make a pretty good congressional intern. We may reach out to him and see if he’d be interested in helping the country in additional ways.”

Rittenhouse has pleaded not guilty on all counts.

Jury deliberations in the case began on Tuesday and continue as of press time. If convicted of the most serious charge, Rittenhouse faces a mandatory life sentence.

In response to the Florida Republican, Stinchfield floated a job offer of his own, saying that he and Gaetz may “have to fight” for Rittenhouse. “I want him here at Newsmax,” he said. “Maybe he can be a Stinchfield intern too.”

“You guys pay way better at Newsmax,” replied Gaetz. “But there’s nothing like the Hill.”

Gaetz is currently the subject of a probe by the U.S. Justice Department looking into whether he violated federal law by providing goods or payments to a 17-year-old girl for sex, according to ABC News.

He’s among several conservative Republicans who have openly supported Rittenhouse. J.D. Vance, an author and venture capitalist running for the U.S. Senate in Ohio, said last week that Rittenhouse’s trial is “child abuse masquerading as justice in this country.”

Per Huffington Post, Vance told Tucker Carlson, “This entire trial — this entire farce — is an indictment on every institution in our society.” 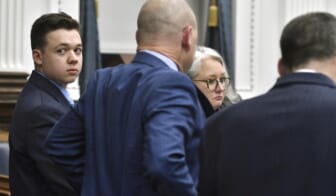 However, Democrats have been openly critical of Rittenhouse, then 17, who crossed state lines armed to act as a medic during protests in Kenosha following the shooting of Jacob Blake by police. Blake was shot seven times in the back in front of three of his children. He remains paralyzed.