A video capturing Stacy savagely beating the mother of his infant son — who was watching — went viral on social media earlier this week.

Former NFL player Zac Stacy was apprehended at Orlando International Airport Thursday night after a video of him savagely beating the mother of his infant son went viral on social media this week.

Stacy was arrested after disembarking an inbound flight from Nashville. His defense attorney argued that he had come back to Florida after learning that a warrant had been issued for his arrest.

However, prosecutors countered with the fact that Stacy had fled the state “immediately” after the alleged attack.

Stacy was ordered to surrender his passport and was held on a $10,500 bond.

According to The Florida Sun-Sentinel, the former running back only spoke briefly in court only to confirm that he planned to return to Tennessee.

As a part of his bond, Stacy can not possess any weapons or firearms. He was ordered to have no contact with the victim. 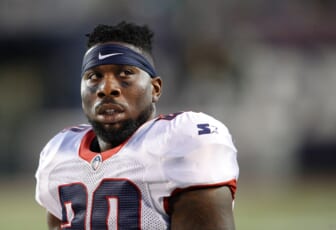 TheGrio has previously reported on the viral video in which Stacy is seen on home surveillance video punching Kristin Evans and throwing her into a flat-screen television. The altercation unfolded while the couple’s 5-month-old son sat watching on the couch.

“Officers arrived on scene within two minutes and were able to determine a domestic violence battery had taken place and that the suspect, Zackary Stacy, had fled the scene,” police in Oakland, Florida said in a statement. “Officers continued to search for Stacy, and the case was forwarded to the investigations unit of the Oakland Police Department to establish probable cause to secure a warrant for Stacy’s arrest.”

The Sun-Sentinel report says that when officers arrived, they found Evans sitting on a couch with her shirt torn and food in her hair. 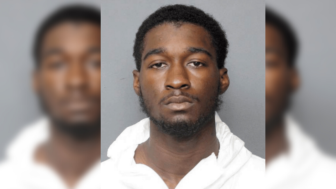 On Twitter, Green Bay Packers star Davante Adams opined, “I’m not retweeting the video but ZAC STACY NEED TO BE THROWN UNDER THE JAIL. Any man that puts his hands on a woman is a coward. Can’t believe what I just saw.”

Robert Griffin III, the Baltimore Ravens quarterback, wrote, “Beating up your woman doesn’t make you strong it makes you weak. We as men are supposed to protect our Queens not use them as a punching bag. If you look at that Zac Stacy video and don’t get angry, sad, and bothered there is something wrong with you. When is his sentencing?”

Others are comparing the case to former Seattle Seahawks backup offensive tackle Chad Wheeler, who was arrested in January for assaulting his girlfriend, who is Black, to that of Stacy’s victim, who is white.

Wheeler faces charges of first-degree assault domestic violence and faces eight to 12 years in prison, if convicted. His trial has been delayed several times, most recently last month.

One social media user succinctly wrote, “Zac Stacy is a coward for putting his on a woman. Him and Chad Wheeler should be thrown in jail.”