While Insecure may be ending this year, many of the show’s cast and creative team are already gearing up for their next projects. Per Deadline, actor Jean Elie and writer Mike Gauyo have joined forces to create a dark comedy for AMC Network’s AllBlk.

Entitled Send Help, the series is described as a “dark comedy coming-of-age” series, per Deadline. It follows “a first-generation Haitian American young man struggling to overcome the challenges of ‘making it’ in Hollywood.”

Send Help is about a young man with dreams of stardom who moves from Brockton, Massachusetts to Los Angeles, California in pursuit of an acting career — “all while trying to be the new man of the family, and exploring what the LA dating scene has to offer.”

The synopsis continues, “Throughout the series, Fritz (Elie) fights to conquer his feelings of imposter syndrome, the Hollywood community, his incredibly demanding Haitian family and a looming family tragedy. Rather than address his shortcomings head on, he chooses to deny and avoid the issues that everyone else can see.”

Send Help is slated for a seven-episode first season and will be directed by Stewart Yost.

As theGrio has previously reported, the Insecure team has been enjoying a victory lap after their impactful five-year run. As one of HBO’s most popular shows, created by Issa Rae, insecure took the culture by storm, with fans tuning in on Sundays to follow the misadventures of her fictional alter ego.

Now that Insecure is ending, many of the show’s creative talents like Natasha Rothwell, Yvonne Orji and others have been setting their sights on their next projects.

Elie, who plays Ahmal Dee on Insecure, shared an official statement regarding the new series.

“Send Help is a love letter to my family and others living with tragedy. It’s also a shoutout to first-generation Americans daring to step into creative fields despite being discouraged by their immigrant families. I hope young people will see what’s possible when you step out of your own way and defy society’s limits,” he said.

On his Instagram account, Elie said, “Speechless! #Sendhelp coming 🔜 I’m seriously at a loss for words right now. And looking forward to to sharing this story with you. #followyoubliss S/O to my brother @b.l.a.c.k.b.o.y.w.r.i.t.e.s and @watchallblk for going on this journey with me. It’s all possible.” 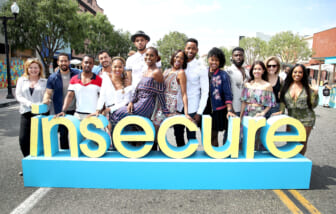 In his own statement, Gauyo said, “This is a series about Haitian people just existing. Not as caricatures or stereotypes, but as fully formed, normalized, human beings sharing the same space as everyone else, while sharing unique experiences that feel universal. I’m incredibly proud of this series and can’t wait to see it on air.”

Have you subscribed to theGrio’s podcast, “Acting Up”? Download our newest episodes now!