The 64th Annual Grammy Awards will January 22 on CBS.

Trevor Noah is set to return as host of the 2022 Grammys Awards. The comedian was master of ceremonies for “music’s biggest night” last year. The 64th Annual Grammys will air live on CBS, as well as stream live on Paramount+ January 22 at 8 p.m. EST.

Noah, host of Comedy Central’s The Daily Show, announced the news during a Wednesday appearance on CBS Mornings. He reflected on last year’s ceremony and delighted in being asked back again.

“I was just lucky to be a part of it, you know,” Noah said. “And I guess we had such a good time that we were like, imagine if we had people there how much more fun would we have had, and so this year the Grammys is going to be back.” 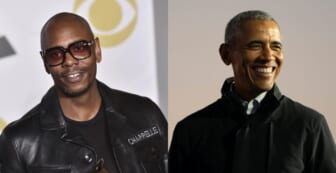 Harvey Mason Jr., musician and Recording Academy CEO, was impressed with the job Noah did in 2021 and delivered a statement about his second run as host.

“Trevor was amazing as our host for the 63rd Grammy Awards with praise from the music community, music fans and critics,” Mason Jr. said. “We’re so excited to welcome Trevor back to the Grammys stage and feel fortunate to once again have him hosting what we believe will be an unforgettable evening.”

George Cheeks, president and CEO of CBS and the chief content officer of News & Sports at Paramount+, is also pleased that the Emmy-winning comic’s signature brand of wit, charisma and intelligence will be gracing the Grammys again. “Trevor brought his trademark talent and versatility to last March’s Grammys, and we can’t wait for him to host the event on CBS and Paramount+ again this year,” Cheeks said in a statement.

Noah, a 2020 Grammy nominee, presided over the 63rd Annual Grammys this past March after it was postponed due to the COVID-19 pandemic. That ceremony included no audience and nominees sat at socially distance tables in open air outside at the Los Angeles Convention, right across the street from the Staples Center, where the show has been held 19 times since 2000.

Last year’s telecast had record low ratings, with only 8.8 million viewers tuning in, as reported by the The New York Times. It was a 53 percent dip from the 2020 Grammys, which had 18.7 millions viewers.

For the 64th Annual Grammys, the event will return to the Staples Center. However, by the time the Grammys air, the venue will have been renamed the Cypto.com Arena, as reported by ESPN.

The 2022 Grammys look to be an historical edition. When nominations were announced last week, it was revealed that pianist/singer Jon Batiste earned a staggering 11 nominations, including Album of the Year for We Are, and Record of the Year for “Freedom.” Batiste, the leader of The Late Show with Stephen Colbert’s house band, Stay Human, is tied for the second most nominations in a single year in Grammy history.

Jay-Z, who received three nominations, surpassed producer/composer Quincy Jones for the most career Grammy nominations of all time with a total of 83. He currently has 23 Grammy awards, the most ever for a rap artist. However, there’s a chance he may be surpassed by longtime collaborator Kanye West. The rapper/producer currently sits at 22 statuettes and has five more nominations in 2022, including Album of the Year for Donda.