Long before Everett Fitzhugh became the first African American to land a broadcasting role with the National Hockey League, he was a kid from northwest Detroit determined to forge a career within the sport he loves.

Now, as he comes to terms with the historical context surrounding his August 2020 signing as the newest play-by-play voice for the Seattle Kraken, Fitzhugh says he is ready to be an inspiration for other hockey lovers whose representation remains low both on the ice and behind the broadcast desk.

“If you’re in that position [as the first], if one finds themselves in that position, you owe it not only to the sport and the culture, but I think you owe it to yourself to take on that responsibility because hockey is a growing game, and you see a lot more Black people, a lot more minorities, a lot more women getting involved in the game,” Fitzhugh told Yahoo Sports.

“To see myself, who grew up on 8 Mile and Myers in Northwest Detroit — the first ever professional goal I set for myself was to get to the NHL,” he told Detroit’s Local 4 News. 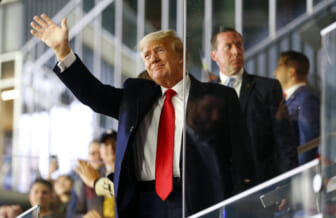 Fitzhugh said his hockey passion was formed as a child watching the hometown Detroit Red Wings slash around the rink, a spectacle he wanted to remain a part of for life — although it rarely included anybody who resembled him.

“There’s a huge hockey community and a huge hockey fan base in Detroit,” he told Yahoo Sports. “So you’re kind of predisposed to it as an early age, no matter where you’re from in the city. And no matter who you are, Black or white, people know the game of hockey. You still didn’t have a lot of minorities playing the game or maybe interested in the game, but you’re definitely exposed to it from an early age, just being in the city.”

The Bowling Green State University graduate spent the previous five years as the play-by-play announcer for the Cincinatti Cyclones, a mid-level professional team in the ECHL, before graduating to the big league ranks — yet remains the only Black play-by-play broadcaster in any level of North American professional hockey.

“It can be lonely sometimes, being a Black hockey fan and being able to see other players make their own way at such a young age it was huge and very inspiring for me,” he added. “Now, fast forward, over 20 years later, I see this as an opportunity to serve as that person that I never had growing up.”