Derrick Boseman said that T'Challa "needs to live on in the Black Panther franchise."

In a recent interview with TMZ, the late Chadwick Boseman‘s brother says the actor would want the iconic role of T’Challa in Black Panther recast in the sequels.

The sequel to the Marvel superhero blockbuster is currently in production, with Ryan Coogler returning as writer and director for Black Panther 2: Wakanda Forever. Boseman, who originated the role of T’Challa, tragically passed away after a four-year battle with colon cancer in August 2020, and details on how the franchise will continue without him have slowly been rolling out. 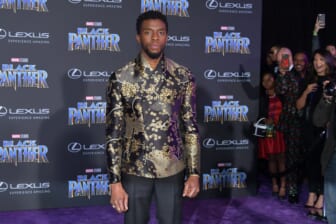 Also Read:
MCU VP confirms T’Challa will not be recast: ‘We just couldn’t do it’

Derrick Boseman told TMZ that he thinks the character, “needs to live on in the Black Panther franchise,” even if that means bringing in another actor to join the MCU and portray him. He then reveals to the outlet that Boseman “knew the power of the character, and the positive influence it carries.”

Derrick said that killing off T’Challa so quickly only deprives the little kids of the role model of a Black king, which is rare in Hollywood. As of press time, there’s no indication that Marvel intends to actually kill the character off, but Nate Moore, MCU VP of Development, confirmed earlier this year that the studio has no plans on recasting T’Challa.

While on an episode of the Ringer-Verse podcast, Moore shared, “You will not see T’Challa in the MCU 616 universe, we couldn’t do it. I will say when Chad passed, it was a real conversation we had with [Ryan] Coogler about what do we do.”

Also Read:
‘Black Panther 2’ to resume filming with Letitia Wright amid rumors of her exit

Moore detailed the conversations Marvel had with Coogler.

“It was a fast conversation,” he said. “It wasn’t weeks, it was minutes of we have to figure out how to move this franchise on without that character because I think we all feel so much of T’Challa in the MCU on the screen, not in comics, right, is tied to Chadwick’s performance, is what he brought to that role both on and off-screen, I would argue.”

“So the challenge for Black Panther: Wakanda Forever is telling a story without T’Challa, and I think it’s a challenge we’re up for and obviously we’re in the middle of it, and we’re figuring it out and so far I think what we’re getting is great.”

Black Panther: Wakanda Forever is set to premiere in the Fall of 2022.