"What a night,: the 23-year-old Atlanta Hawks star wrote on Instagram over the weekend.

The 23-year-old NBA star shared Instagram photos of himself proposing to Miller on Friday following their recent engagement. The pictures show Young getting down on one knee and presenting a ring box to a stunned Miller, who covered her mouth with her hand as the photographer snapped the memorable photos.

A bed of white flower petals can be seen in the foreground and an assortment of blue balloons is positioned in the background along with a sign that appears to say “Marry me.” 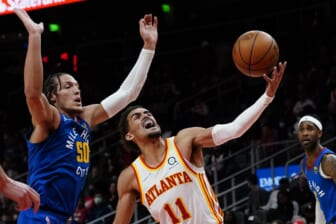 “What a night,” Young wrote in the photo caption.

Young’s future bride shared her own set of pics on her Instagram page the same night. One image showed her showing off the new enormous diamond on her left hand. Another showed her and Young hugging after his proposal.

The 26-year-old Miller reportedly was born and raised in Norman, Oklahoma before attending college there at the University of Oklahoma. She and Young have been dating for about five years after meeting at OU, according to TMZ.

Young played two seasons for the Sooners before getting selected fifth overall in the first round of the 2018 NBA Draft. Miller was on Oklahoma’s cheerleading squad while Young was playing ball there.

The couple went official on Instagram in October of 2017, according to one of Miller’s old IG post.

“I guess you could say I’m a pretty big fan,” Miller wrote at the time. 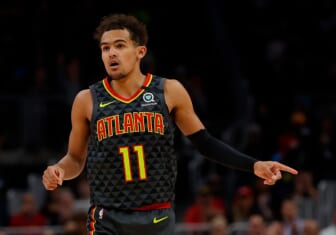 The lovebirds’ engagement announcement came two days before Young reportedly became one of the latest NBA players to enter the league’s COVID-19 health and safety protocols.

“Oh you cold! Congrats my brother!!!” Jacquees wrote on IG.