The death of Archbishop Desmond Tutu spurred a week of mourning in his home country of South Africa, leading to an environmentally-friendly sendoff per his wishes.

During aquamation, a “combination of gentle water flow, temperature, and alkalinity are used to accelerate the breakdown of organic materials” after a body is buried in soil, according to Bio-Response Solutions, an Indiana-based company that specializes in the procedure.

The process “uses 90% less energy than flame cremation and does not emit any harmful greenhouse gases,” per the company’s website.

Tutu, a Nobel Peace Prize-winner celebrated for his efforts in the struggle for freedom and justice in apartheid South Africa, was also dedicated to climate activism and protecting the environment, per CNN.

“When—as you have been doing—you support the struggle for justice for peace for reconciliation, then the victims of apartheid—that vicious, evil, immoral system—have their morale boosted so that your impact is a positive one on the victims of apartheid,” Tutu said in a 1986 address pushing the U.S. Congress to vote on sanctions against South Africa.

“And they say people care, the world cares, and therefore our cause must be just. Our cause is a noble cause, and our cause will prevail in the end despite all appearances to the contrary,”  he continued. 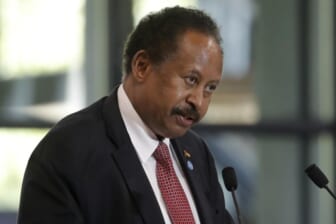 Accompanying his request for aquamation instead of cremation, Tutu reportedly left plans for a modest funeral, where he would be sent off in an inexpensive pine coffin, per CNN.

“The passing of Archbishop Emeritus Desmond Tutu is another chapter of bereavement in our nation’s farewell to a generation of outstanding South Africans who have bequeathed us a liberated South Africa,” tweeted South African President Cyril Ramaphosa on Sunday.

“Desmond Tutu was a patriot without equal; a leader of principle and pragmatism who gave meaning to the biblical insight that faith without works is dead. We pray that Archbishop Tutu’s soul will rest in peace but that his spirit will stand sentry over the future of our nation,” he continued.

“Palestine mourns the passing of Desmond Tutu, whose humanity & compassion were equalled only by his courage & principled commitment in our shared struggle for justice & freedom. His support for Palestine was an embrace of love & empathy. I’m honoured to have had him as a friend,” tweeted former Palestinian Minister of Higher Education Hanan Ashrawi.

According to theGrio’s David. A. Love, while Tutu is widely recognized as a giant in the struggle for freedom and justice in apartheid South Africa, much less is known about his fight for women’s rights and the rights of the LGBTQ+ community, the Palestinian people and the environment.

For example, he once said he “would rather go to hell than to a homophobic heaven” and proclaimed that “If God, as they say, is homophobic, I wouldn’t worship that God.” Tutu advocated at the United Nations for equality for women and LGBTQ+ people and was known for his empathy as he stood with them and supported same-sex marriage. “People are penalized solely on the basis of their sexual orientation—I oppose such injustice with the same passion I opposed apartheid,” Tutu said.