Normani and Taraji P. Henson stopped by the Late Show with Jimmy Fallon on Tuesday and participated in a karaoke-style game for the That’s My Jam segment.

Henson and Normani were sequestered in one sound booth, while filmmaker Taika Waititi and singer Rita Ora were in another for a round of Slay It Don’t Spray It.

Each pair had to sing along to a popular song but when the music stopped, they had to finish the lyrics or get splashed in the face with water from their microphones.

Henson and Normani tackled Jennifer Lopez’s hit single “Waiting for Tonight,” but when memory failed Henson on some of the lyrics, both were blasted with water. The actress and the singer screamed and ran to the back wall for cover.

“You cannot wet Black girls’ hair,” said Henson. “That was not in my contract! I’m getting out.”

Normani touched her own hair and noted “My leave out.”

After the hilarious moment went viral, Normani took to Twitter to say: “My hearted was racinggggg cause BABY was on the verge of that shrinkage.”

One fan responded, “The Flash ain’t even fast enough to stop the shrinkage.”

Another Twitter user said, “What in the hell is so funny Mr. Fallon?? U ain’t the one who gotta make 4c hair blend with 24 inches of Peruvian straight.”

A third added, “From birth, there’s a code written in our DNA to protect our edges & leave-out at all times.”

“Tell jimmy to run you your money for a new silk press,” wrote another fan under Normani’s post.

“I felt this when Taraji was spiraling about her hair first thing I said after I heard they’re getting sprayed is “uhh what about their hair” where the shower caps lol,” another Twitter user commenter.

Last month, theGrio caught up with Henson to dish about her role as the iconic villain Miss Hannigan in NBC’s Annie Live!, which aired in December. At the time of the interview, Henson and her co-star Celina Smith could barely contain their excitement while discussing their rehearsals.

Henson explained, “We just moved onto the actual stage where we will be filming and with the actual set pieces. I literally got to set and cried because, the first days of a theatre production you’re literally working in a black room with tape all on the floor…you can’t really visualize it.” 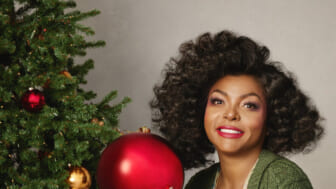 For Henson, the production was a return to the stage, which is what she calls her “home.”

“I always feel home on the stage. When I was second-guessing or questioning whether I was still in love with this thing called ‘TV and Film,’ I said, ‘the telltale will be how I feel when I go back to the stage,’” she said. Henson insisted that she still feels more comfortable doing theater than she does on screen, a medium in which she has been incredibly successful.

“The stage is a spiritual place for me, it really is,” she shared. “I feel more at home in a theater on a stage than I do with the foreign cold camera looking at me.”