After Megan Thee Stallion removed photos of the couple from her Instagram page, the rumor mill started churning in full.

Rapper and producer Pardison Fontaine has responded to rumors that he and his girlfriend, rapstress Megan Thee Stallion, have broken up.

The two started dating in late 2020, but after Megan recently removed photos of the couple from her Instagram page, the rumor mill started churning in full.

Fontaine reposted a story from one gossip site in his Instagram Story. “Stop this cap nobody puttin hands on nobody …(At least not in that way ),” he wrote. “Been seein the break up rumors and was lettin y’all imaginations run ..but y’all gettin too crazy ….ain’t give ni**as a story so they made one … we really been on it double time.”

A report on BlackSportsOnline shared an IG Live that supposedly captured the couple having a huge fight. Further, the site alleged — with no evidence — that the cause of their breakup was domestic violence by Megan because “she is allegedly a mean drunk.”

Fans have also been speculating about their possible breakup since last month because the Grammy Award-winning rapper didn’t make a public post for Fontaine’s birthday. Fontaine, whose real name is Jorden Thorpe, turned 32 on Dec. 29. He is credited with co-writing Cardi B’s first hit single, “Bodak Yellow.”

Megan Thee Stallion, whose real name is Megan Pete, recently graduated from Texas Southern University with a Bachelor of Science degree in health administration. She has said she plans to open an assisted living facility in her native Houston. 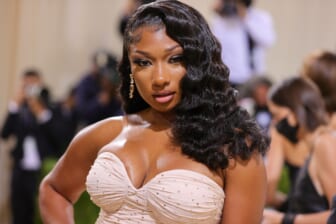 According to Essence, Fontaine showered Meg with gifts for her graduation, including a custom letterman jacket with her first name on the front and TSU’s insignia on the right breast. The back of the jacket featured a large version of the school’s crest modified to read “Thee Stallion University.”

In a 2021 interview on Peace of Mind with Taraji, the rapper said of Fontaine, “My boyfriend does make me very happy. He definitely takes care of me emotionally … He makes my brain feel good. He makes my heart feel good.”