The comedian took Sean Hannity and Tucker Carlson to task over their comments about President Biden's desire to nominate a Black female to the Supreme Court.

Trevor Noah, the host of Comedy Central’s The Daily Show, used his television platform to take both Fox News and fellow comedian Joe Rogan to task over the issue of Blackness this week.

The Grammy-nominated comic called out Fox reporters, commentators, and hosts for their commentary surrounding President Joe Biden’s promise to nominate a Black woman to the Supreme Court. 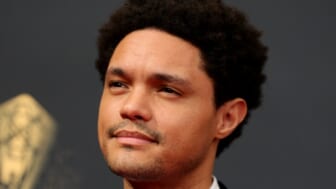 Sean Hannity criticized Biden for allegedly “excluding all potential candidates who are not African-American women,” saying that to “exclude certain candidates solely on race and gender is beyond extremely divisive; it’ may even be illegal.”

Tucker Carlson implied that Biden is attempting to “dehumanize” Black women by assuming they are all the same.

Noah fired back at both of them during a segment on his popular show, saying that the Fox anchors were implying that the Black female candidates that Biden will consider are less qualified than others.

The comedian said that wouldn’t be the case.

“Biden is going to pick a Black woman who is also qualified,” Noah said on Thursday. “These people act like Biden is just going to show up to the mall and be like, ‘Yo, Shaniqua, come with me.’”

Noah also took Carlson down a peg, jokingly offering him comfort now that the court is more diverse.

“Of course he’s upset. Think about it. For almost all of American history, the entire Supreme Court was white dudes with bow ties and weird hair. Now that’s all gone. It’s all gone. Where’s Tucker’s representation, huh?”

“The Black and white thing is so strange because the shades are such a spectrum of shades of people,” Rogan opined on his podcast, The Joe Rogan Experience when his guest was controversial Canadian psychologist and self-proclaimed men’s rights activist Jordan Peterson.

“Unless you are talking to someone who is, like, 100% African from the darkest place where they are not wearing any clothes all day and they have developed all of that melanin to protect themselves from the sun, even the term Black is weird. When you use it for people who are literally my color, it becomes very strange,” Rogan said.

Noah, who is half Xhosa and half Swiss-German himself, jokingly looked at his hands and said “Oh, my God; I’m not Black,” and called his skin “caramel mocha Frappuccino.”

After that quip, Noah called out Rogan’s assertion about African-Americans identifying themselves as Black, offering a history lesson to remind him, and viewers, that the term Black was not made up by Black people.

“The things these guys seem to be ignoring is that Black people didn’t call themselves Black. You understand that, right? It’s not like Black people were like, ‘We’re Black.’ No. In Africa, we have tribes. We have cultures. Zulu. Xhosa. Baganda. Igbo. Wakandans!

But then white people got there, and they were like, ‘Wow. There’s a lot of Black people here. A lot of Black people.’ Then in America, they invented a rule that if you had one drop of Black blood in you, that makes you Black—which defined how you were treated by the government and by society.”