Hennepin County Judge Cahill rose to national prominence presiding over the trial of Derek Chauvin, the former Minneapolis officer convicted in the May 2020 murder of George Floyd, a police killing that prompted global protests against police violence. Judge Cahill allowed cameras inside the courtroom for “gavel-to-gavel coverage” of Chauvin’s trial for the first time in Minnesota history.

According to a local CBS station, two sources are confirming it was Cahill who signed last week’s warrant, reportedly as part of a homicide investigation. However, Locke — a legally armed gun owner shot by police who stormed into his home as he slept in the middle of the night — was not named in the warrant.

The original search warrants remain under seal as they are part of an active homicide investigation, St. Paul police said on Friday.

Per the previous reporting, “St. Paul police originally did not request a no-knock warrant from a judge, but when Minneapolis police were asked to execute the warrant, MPD insisted the warrant be changed to authorize it be executed without first knocking,” according to KARE 11 Investigative Reporter A.J. Lagoe. 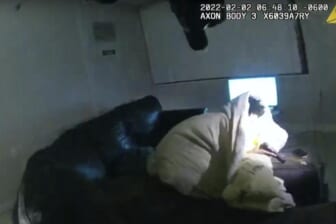 “This inexplicable, yet deliberate choice needlessly ended Amir’s life,” wrote civil rights attorneys Ben Crump and Jeff Storms in a joint statement, per KARE 11. “It’s past time that the Minneapolis PD be transparent and accountable to Amir’s family and the community that they are sworn to protect.”

“No-knock raids at the hands of law enforcement continue to take the lives of innocent Black people,” they added. “We ask that just as people raised their voices for Breonna Taylor, they do the same for Amir Locke. Enough is enough.”

Since Locke’s death, Minneapolis Mayor Jacob Frey has announced a moratorium on both the request and execution of “no-knock” warrants, except in cases where there is an imminent threat to the public.

The Police Officers Federation of Minneapolis has issued a statement regarding the warrant, saying, in part, “The Minnesota’s Bureau of Criminal Apprehension will gather the needed facts for the investigation, and no conclusions should be made until the investigation is complete.”

They expressed “our sympathies to the family for the loss of Amir Locke that resulted from this tragic chain of events as well as our support of the officers and their families.”