DaBaby and Brandon Bills, the brother of the rapper’s ex-girlfriend DaniLeigh, got into a brawl at a bowling alley in Los Angeles that was captured on camera.

The footage is making the rounds on social media, showing DaBaby and Bills exchanging words before the hip-hop star throws the first punch, TMZ reports. That’s when all hell breaks loose and DaBaby’s crew physically attacks Bills, who claims he was kicked in the head while on the ground.

Law enforcement is now investigating DaBaby for assault with a deadly weapon, according to the report.

Bills spoke out following the fight, saying DaBaby and his entourage “jumped him” and roughed him up on the slippery bowling alley floors. 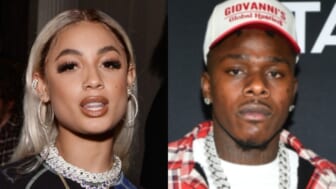 Also Read:
DaniLeigh charged with assault after altercation with DaBaby

DaniLeigh—who shares a daughter with DaBaby, also reacted to the “lame and soooo sad” bowling alley fight in an Instagram Stories update.

“Lame as hell! Running up on my brother on some slippery a— floors with 5/6 of ya boys while he’s by himself and not even touching him!! Lame and sooo sad,” the singer wrote before deactivating her Instagram account.

DaBaby and DaniLeigh had a major blow-up on social media in November, which resulted in two counts of simple assault for DaniLeigh, per theGrio.

The Charlotte Observer reported that police responded to DaBaby’s North Carolina home where the rapper told Charlotte-Mecklenburg officers that DaniLeigh, whose real name is Danielle Curiel, had assaulted him.

The situation started with the hip-hop star telling the mother of their 3-month old daughter at the time, to leave his home.

DaBaby later said in a social media post that he called the police for his own safety.

“I would like to swiftly remove myself from any of the ‘hostile’ behavior put on display moments ago,” DaBaby wrote on Instagram, as previously reported.

“This here thing has gone far enough for shawty to crash out on her own and it saddens me because i still got a queen to raise,” he continued. “The last hour has been documented for my safety and business done based on my reputation, with multiple threats of setting up an internet scheme & a person refusing to not let me go. Me and somebody else here knew to record her.”

DaBaby explained to his fans at the time that DaniLeigh “beat on” him and described her as a “fatal love attraction” type of girl. 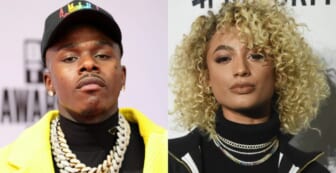 He wrote on Instagram: “I done been beat on and yelled at and chased around like one [of] them fatal love attraction type girls. But I knew to keep it together… End of the day no big deal I don’t want no charges pressed or nothing I just want her peacefully removed… My focus right now is solely on this new project and this LiveShowKillaTour starting Nov. 26th. Hate shawty went out that way but that ain’t my business I’m a father first always, and always will be.”

Have you subscribed to theGrio podcasts “Dear Culture” or “Acting Up?” TheGrio is now on your TV via Apple TV, Amazon Fire, Roku, and Android TV. Also, please download theGrio mobile apps today!