"I would like to swiftly remove myself from any of the 'hostile' behavior put on display moments ago," DaBaby wrote in an Instagram story.

Chart-topping rapper DaBaby appears to be in hot water with the public again. He’s accused of calling police to remove singer Danielle Leigh Curiel, the mother of his youngest child who also goes by the stage name DaniLeigh, from his Los Angeles home.

Multiple videos of the Grammy-nominated lyricist, whose real name is Jonathan Lyndale Kirk, having a heated argument with DaniLeigh, 26, were posted on Instagram Sunday. One clip shows DaniLeigh lying in bed as she appears to be feeding the pair’s three-month-old daughter. 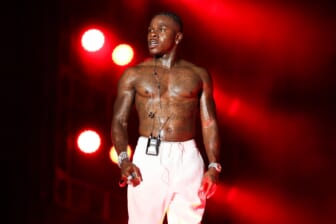 Several clips from the incident have been shared widely on social media, making DaBaby the #2 trending topic on Twitter late Monday morning. One IG Live clip posted by DaniLeigh shows police arriving at DaBaby’s home as he asks Leigh to leave, according to Hot 97.

The 29-year-old rapper posted a lengthy statement on his IG page early Monday morning explaining his side of the story.

“I would like to swiftly remove myself from any of the ‘hostile’ behavior put on display moments ago,” DaBaby wrote.

“This here thing has gone far enough for shawty to crash out on her own and it saddens me because i still got a queen to raise,” he continued. “The last hour has been documented for my safety and business done based on my reputation, with multiple threats of setting up an internet scheme & a person refusing to not let me go. Me and somebody else here knew to record her.”

In the same IG story post, DaBaby acknowledged police responding to the scene. 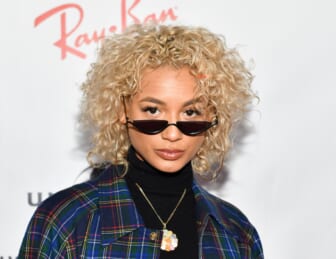 Also Read:
DaniLeigh announces her pregnancy: ‘As you grow so does my love’

“I don’t want no charges pressed or nothing. I just want her peacefully removed, which they need to hurry up [and] do as we speak,” he wrote. “I ain’t even want that behavior on display, but it’s okay man. This too shall pass. It’s all good.”

DaniLeigh later responded on Instagram with a statement of her own, telling viewers she and DaBaby have been living together for the last three months since their baby was born.

“Tonight he wanna come in the room talking ’bout I need to go, don’t matter where I go,” she wrote. “This man is a f—ing coward!!!!! I’m sleeping after cooking him dinner and he wanna say I need to go! F–k U, Baby! And damn I shoulda listened to the cap a– internet about this man! I’m sorry to my baby that her father is kicking her out her home at three months.”

Romantic rumors about DaBaby and DaniLeigh’s relationship have been swirling for some time now. She announced her pregnancy in July.

The rapper has been the subject of controversy since going on a homophobic tirade during a performance at the Rolling Loud Festival earlier this year.

DaBaby told his Instagram followers that he remains focused on releasing his latest project and concert tour on Nov. 26. He also posted pictures of the movie covers for the classic 90s film It’s a Thin Line Between Love and Hate starring Martin Lawrence and Lynn Whitfield and Jordan Peele‘s 2017 Oscar-winning thriller Get Out, insinuating his relationship with Leigh has been a mix of the plots from both films.

“This some real deal Hollywood sh–, but it’s all good. Y’all n—-s don’t be fooled,” the rapper said during a separate IG video post. “Don’t be distracted. Don’t be fooled, man.”