Born Marcenia Lyle “Toni” Stone in 1921 West Virginia, Stone’s love of the sport developed at a young age. According to the Atlanta-Journal Constitution, she learned to play baseball on playgrounds while growing up in St. Paul, Minnesota in the 30s and 40s. At 15, her impressive batting average earned her a spot on the all-male semi-pro Twin Cities Colored Giants.

Stone played professional baseball for the Indianapolis Clowns in the American Negro League after joining the team in the early 1950s. Per PEOPLE, she was the first of three women to play for the franchise.

“In 1953, Stone filled the spot of future Hall-of-Famer Hank Aaron as the second baseman for the Indianapolis Clowns, one of the League’s most prestigious teams. Undeterred by taunts during her debut season with the Clowns, Stone hit a single off of Satchel Paige, who is widely considered the greatest pitcher in Negro League history,” said Google.

Stone also played for the San Francisco Sea Lions, the New Orleans Creoles, and the Kansas City Monarchs before retiring from baseball in 1954. She died in 1996 from heart failure at age 75.

The Google Doodle illustration shows Stone playing for the Indianapolis Clowns as a male athlete runs past her on the field. The illustration was created by San Francisco-based artist Monique Wray.

“Toni was a trailblazer, a Black woman doing things she’s not expected to do, whether the world likes it or not,” said Wray in a release from Google, as reported by USA Today. 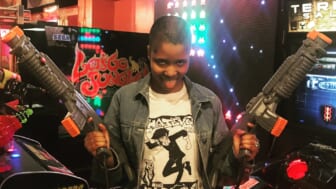 “The moving image not only draws inspiration from baseball action photography while incorporating Stone’s sense of humor and iconic curly hair, it also brings Stone’s legacy to life for new generations,” a Google spokesperson tells PEOPLE.

“Here’s to you, Toni Stone — thanks for showing the world what determination and unstoppable love for the game can achieve,” Google said.

“Toni’s gift was to play sports, and she is celebrated today because she fought to play in a mens’ baseball club in Minnesota. With the help of her priest who spoke to the baseball club’s coach, Toni got into the club,” Maria Bartlow, Stone’s niece, told Google. “During Toni’s career, she suffered humiliating prejudices from the audience and her teammates. However, she never let that stop her from playing baseball.”

In 1950, Stone married Aurelius Alberga, a man who was 40 years her senior. He didn’t support her professional baseball career but that didn’t diminish her passion for playing. Stone even played alongside Jackie Robinson, the first African American to play in Major League Baseball.

“Aunt Toni loved visiting schools and talking to children about her days in baseball. She always had a warm smile and reminded school kids that they could do anything they wanted to do if they just tried. She would be happy to see the many opportunities that women have achieved today, especially women of color,” Shawn Bartlow, Stone’s great-nephew said in the Google release. 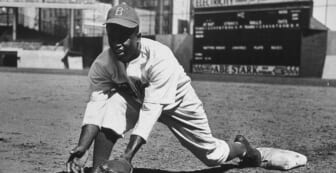 Stone overcame gender and racial discrimination to become a trailblazer.

“Her exceptional batting average of .280 earned her a spot on the bench with the Negro League All-Star team while she continued to travel across the United States playing second base for the minor league New Orleans Creoles,” per Google.

“Toni Stone Day” was established in St. Paul in 1990 and several exhibitions in the National Baseball Hall of Fame pay tribute to her, according to the report.