Darnella Frazier, who was 16 when Floyd was killed, testified that she knew Floyd needed medical care when he became unresponsive

Federal prosecutors rested their case Monday against three former Minneapolis police officers charged with violating George Floyd’s civil rights, after a contentious day of trial that included testimony a use-of-force expert and from the teenager who recorded widely seen video of Floyd’s killing.

Darnella Frazier, who was 16 when Floyd was killed, testified that she knew Floyd needed medical care when he became unresponsive. She said: “Over time, he kind of just became weaker and eventually just stopped making sounds overall.”

J. Alexander Kueng, Thomas Lane and Tou Thao are charged with violating Floyd’s constitutional rights while acting under government authority. All three are accused of depriving Floyd, a 46-year-old Black man, of medical care while he was handcuffed, facedown as Officer Derek Chauvin pressed his knee onto Floyd’s neck for 9 1/2 minutes. Kueng knelt on Floyd’s back and Lane held down his legs while Thao kept bystanders back.

Kueng and Thao are also accused of failing to intervene to stop the May 25, 2020, killing, which triggered protests worldwide and a reexamination of racism and policing. The charges allege that the officers’ actions resulted in Floyd’s death.

The prosecution rested after nearly three weeks of testimony from bystanders, doctors, police officers and others. Their last witness was Frazier, who is now 18.

Moments after she took the stand, Frazier began crying, saying: “I can’t do it. I’m sorry.” The judge, who has been trying to keep emotional testimony out of the trial, took a short break before resuming. When Frazier came back, she talked witnessing Floyd on the ground with Chauvin’s knee on his neck.

“It looked like he was very uncomfortable and he kept saying, `I can’t breathe,’” she said, adding that Thao looked like he was protecting and patrolling the area. When prosecutor LeeAnn Bell asked what it appeared to her that Thao might need to protect. She said Floyd “was the only one who needed protection at that moment.”

She added: “I didn’t see George Floyd resist at all. The only thing I saw him do was really try to find comfort in his situation … try to breathe and get more oxygen.”

Earlier Monday, a use-of-force expert testified that the three former Minneapolis police officers should have intervened. The testimony from Tim Longo, the police chief at the University of Virginia at Charlottesville, was peppered with emphatic objections, numerous warnings from the judge that the information was repetitive, and combative cross-examination.

Lane’s attorney, Earl Gray, challenged Longo on whether he was asserting that “my client, a four-day veteran” should have thrown Chauvin off Floyd. Both Kueng and Lane were just a few days into their jobs as full-fledged officers.

“I think someone should have done something, yes,” Longo replied.

Gray continued, thundering, “What else should they have done besides that?”

“No one asked Chauvin to get his knee off his neck,” Longo said after a little more discussion.

Longo testified earlier that an officer has a duty to take “affirmative steps” to stop another officer from using excessive force. 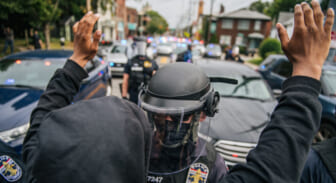 “The term ‘intervene’ is a verb, it’s an action word. And it requires an act. And what you do is, you stop the behavior,” he said.

When it comes to a duty to provide medical aid, he said, Thao “didn’t do anything” and Kueng took no further action after checking Floyd’s pulse, and finding none.

Longo said that when Lane gave chest compressions to Floyd in an ambulance, he was fulfilling his duty to provide medical aid. But, he said, that does not apply to what happened before that point, when no aid was given.

Thao’s attorney, Thomas Plunkett, suggested that Longo reviewed only materials that prosecutors “cherry picked” for him and didn’t look further. He pressed a defense theme that the Minneapolis Police Department bears responsibility for Floyd’s killing for training its officers poorly.

Plunkett played part of a training presentation that showed violent confrontations between officers and subjects, with audio of a locker room speech given by actor Al Pacino, playing a coach in the 1999 football movie “Any Given Sunday,” exhorting his players to fight “inch by inch” because it will make the difference between winning and losing — and living and dying.

Plunkett said the video is the last thing recruits see in their use-of-force training and asked if it was consistent with accepted police policies and practices. Longo replied that he found the video “very disturbing,” because of its images of people dying and getting hurt, but that he didn’t know the context in which it was presented. 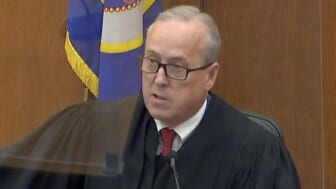 Before court ended for the day Monday, Thao and Kueng told the judge that they plan to testify. Lane’s attorney, Earl Gray, told the jury earlier that Lane would also be taking the stand, but on Monday, Gray said he and Lane would like to talk it over more before making a decision.

Chauvin, who is white, was convicted of murder and manslaughter in state court last year and later pleaded guilty to a federal civil rights charge.

Lane, who is white; Kueng, who is Black; and Thao, who is Hmong American, also face a separate state trial in June on charges alleging that they aided and abetted murder and manslaughter.