Opinion: As everyone applauds the Super Bowl champions, the NFL’s star-studded halftime show and Eminem’s right knee, I’m still trying to figure out what it all means. 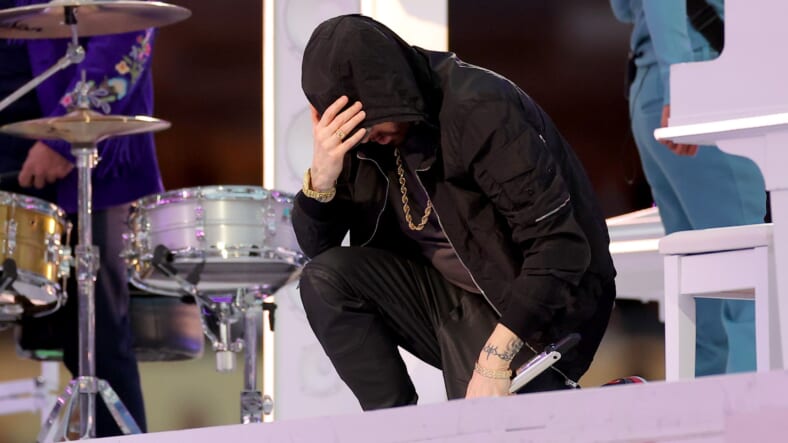 I did not watch the Super Bowl.

The reasons why the billionaires who own National Football League franchises can pocket $309 million each off Black talent while whiteballing Colin Kaepernick, ignoring Black coaches, and race-norming Black brains is that they know we will continue to consume their product, no matter how much they spit in Black people’s faces.

To be fair, I am not boycotting the NFL, nor am I one of those people who insist that anyone who watches pro football is betraying their people. While I simply cannot muster up the level of enthusiasm I once felt about the sport, I remain conflicted about the idea of Black people bearing the sole responsibility of eliminating the abuse inflicted upon us. It is our duty to fight white supremacy but ending it is white people’s responsibility. I wholeheartedly accept the irony that this article is about the NFL’s racism and exploitation of its labor force was posted to Facebook on a computer made by underpaid Chinese workers. But how else am I going to purchase that thing I want from Walmart after I pay my taxes to the American government? 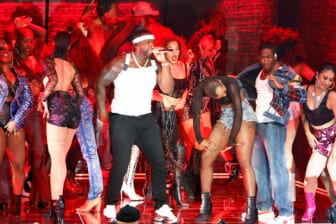 See? We all pick and choose our fight, which is why I understand the people who were so excited to see Snoop cripwalk across the stage built by the corporation that kicked Kaepernick to the curb. I am old enough to remember when Serena Williams was criticized for doing the same thing on center court at a sporting event. Again, I don’t blame Black people for this. What else are we supposed to do when white America demonizes the history, art and the entirety of Black culture until they figure out how to two-step to our pain? We were dancing to Kendrick Lamar’s “Alright” when it was a protest song about Black Lives Matter terrorists, and Snoop Dogg was still a thug who openly consumed illegal drugs.

However, after watching clips and screenshots of the NFL’s halftime show, one particular part of the spectacle of formerly demonized negro derelicts confused me:

What was Eminem doing?

I understand that white people rather enjoyed the performance by that Oscar-nominated actress who sang along with the guy on the piano who invented headphones. When the Vitamin Water guy who produces TV shows came out after Martha Stewart’s bestie, they probably found that to be delightful. Even though the guy in all-black talked a little too fast, I assume most Caucasian connoisseurs of mainstream music thought: “My, how Lil Bow Wow has grown up! He’s even going by his real name now—Kendrick Lamar!”

But can someone tell me why everyone is applauding Eminem for kneeling down like a Marvel hero who just landed after a sky fight with a supervillain? Even though we wrote a story about it, I have yet to hear anyone explain its significance. What does it mean? 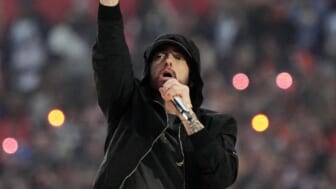 As we reported, it was rumored that Eminem took a knee “in solidarity with Colin Kaepernick,” but I know that can’t be true. Although many people have created some kind of false narrative that Kaepernick’s pre-game protest had nothing to do with America or the flag, his protest was about America. It was about the flag. It was about the national anthem. In case there is some confusion, maybe Kaepernick’s actual words can offer a clue:

“I am not going to stand up to show pride in a flag for a country that oppresses black people and people of color,” he explained. “To me, this is bigger than football and it would be selfish on my part to look the other way. There are bodies in the street and people getting paid leave and getting away with murder…I am not looking for approval. I have to stand up for people that are oppressed. … If they take football away, my endorsements from me, I know that I stood up for what is right.”

Kaepernick didn’t kneel during the anthem because he preferred curtseying. He did it because it was against the rules. That’s the whole point of protest. Copping a semi-squat during the bridge of a Tupac song doesn’t quite equate to kneeling during the traditional playing of America’s theme song. Although I don’t think Eminem or the people lauding his rebelliousness mean any harm, perpetuating the notion that Marshall Mathers’ performative act of protest means anything is part of the reason why the NFL is willing to schedule a halftime Super Bowl Shuffle with some of the world’s greatest booty-poppers during television’s most-watched event.

They know we ain’t gonna do sh*t.

Enslavers were never afraid of “abolitionists”; they fought the bloodiest war in the history of the North American continent to stop the actual abolition of slavery. They didn’t really mind civil rights marches; they were trying to prevent Black people from gaining their civil rights. And Marshall Mathers kneeling on a platform built with the dollars earned by beating Black people into compliance means absolutely nothing if the kneeler has already complied. It’s as meaningless as walking across the Edmund Pettus Bridge with a police escort after it is already splattered with the blood of the innocent or honoring the end of slavery once you have siphoned off the labor, wealth and humanity of the people you enslaved.

Furthermore, the mindless willingness to applaud Eminem’s revolutionary-but-ultimately-empty gesture partly absolves the corporation that banished the actual revolutionary. The NFL had an actual Black-people-are-stupid policy, reflected that belief in its hiring practices and dared anyone to do anything about it. But now that they have painted “End Racism” in the end zone and played Lift Every Voice during the preseason, they have proven their dedication to anti-racism.

And perhaps the worst part is, it worked.

Again, I’m not judging anyone who enjoyed the halftime show because Mary J. Blige is one of my favorite artists. I am a K-Dot fan, and I absolutely love Snoop. I love music as much as people in Montgomery love buses, or Colin Kaepernick loved football. But you know who else I love?

I want them to be free.