The film, which premiered to rave reviews at TIFF, is a "documentary-memoire" from Afro-Latina creator Rebeca Huntt

In an exciting partnership, Steven Adams and Theo Dumont of Alta Global Media were announced as executive producers of BEBA, a documentary-memoire from Afro-Latina writer/director Rebeca Huntt.

Beba, Huntt’s directorial debut, is fresh off some serious critical acclaim after its world premiere at TIFF. Now ahead of its European premiere at the Berlin 2022 Film Festival, the film will see the Peabody Award-Winning Manager/Producer Steven Adams and Marketing and Film Festivals vet Dumont (both co-founders of Alta Global Media) join on to produce, according to a press release obtained by theGrio. 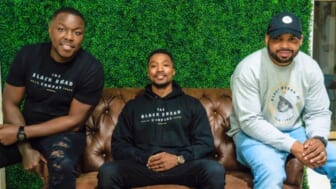 Per the press release, BEBA, “is a moving testimony of a New York artist with Afro and Latin American roots: With her poetic-autobiographical film, Rebeca Huntt, aka ‘Beba,’ sets out to defy the world with the proud, angry assertion, ‘This is my story. I am the lense.’ A strong voice for exploring one’s origins – and the artistic statement of a great talent.”

Adams shared in a statement regarding the film, “We are delighted to come aboard as EP’s on this beautiful and powerful film. Rebeca is one of the most talented next generation filmmakers to date and we can’t wait to help share this film with the world in the coming months.”

Adams has produced projects such as Netflix’s Rodney King and Starz’ A Huey P. Newton Story, both of which were directed by Spike Lee. He also served as VFX Executive Producer with Paris-based VFX house BUF for four years, under which his credits include Avatar, Life Of Pi, and Thor.

Beba is written and directed by Huntt and produced with Sofia Geld. Other executive producers include Petra Costa, Alyse Ardell Spiegel, Alessandra Orofino, Joy Bryant, and Inuka Bacote-Capiga. It is represented by UTA Independent Film Group.