Curtis Anderson effectively stole just shy of $3 million from the Kappas over the course of six years, according to investigators.

Curtis D. Anderson — the former Kappa Alpha Psi Fraternity executive who became embroiled in a multi-million dollar embezzlement scandal roughly three years ago — was sentenced to 2.5 years in prison on Tuesday, according to the Philadelphia Inquirer.

The now 60-year-old Anderson spent two decades working as a finance director at Kappa Alpha Psi’s international headquarters in Philadelphia. He confessed in December 2018 to embezzling more than $1 million from the fraternity over the course of six years to fuel his gambling habit, as theGrio previously reported.

Investigators ultimately determined Anderson embezzled just shy of $3 million from the Kappas, according to court documents reviewed by theGrio on Wednesday.

The fraternity fired Anderson in December 2018 after Kappa leaders realized money was missing and confronted him about it, the Philly Inquirer reported. He later pleaded guilty to wire fraud and aggravated identity theft charges, court records show.

“I lost myself in a very dark season of my life to a true beast — an uncontrolled gambling addiction,” Anderson told a courtroom gallery filled with his fraternity brothers on Tuesday, according to the Philly Inquirer.

“But that’s not an excuse for what I did, and I’m honestly sorry,” he added.

U.S. District Judge Timothy Savage credited Anderson for seeking treatment and working to atone for his crimes, but also noted Anderson’s betrayal of his fraternity brothers.

“What I see is before me is a 60-year-old man who abused his employer’s trust and is now a shamed and convicted man,” Savage said, according to the Philly Inquirer. “He enjoyed a wonderful reputation and all of that has been shattered. … That is punishment. Punishment to carry the shame. Punishment to worry about what people that always looked up to you think of you now. I can’t order that.” 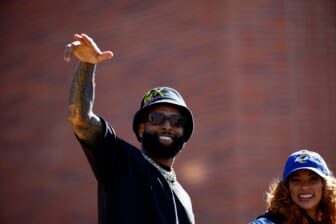 Prosecutors said Anderson started stealing from the Kappa’s funds in June 2012 by writing checks to himself and other people whose signatures he forged and exchanging those checks for cash.

Santander Bank alerted the Kappas about the unusual activity in 2018, according to Philly Inquirer.