"Justice was done. The verdict was proper and we are thrilled," defense attorney Stewart Mathews said.

Ex-Louisville Metro Police detective Brett Hankison has been acquitted on all three charges of felony wanton endangerment in connection with the Breonna Taylor raid on March 13, 2020.

As reported by The Louisville Courier-Journal, a Jefferson County jury of eight men and four women deliberated for three hours before returning with a not guilty verdict on Thursday after five days of witness testimony.

“Justice was done. The verdict was proper and we are thrilled,” defense attorney Stewart Mathews said, CNN reports.

TheGrio previously reported that Hankison, Sgt. Myles Cosgrove and Detective Jonathan Mattingly were serving a no-knock warrant at Taylor’s apartment on March 13, 2020, and unleashed a barrage of bullets, killing the emergency medical technician.

Taylor’s boyfriend, Kenneth Walker, who was living with her at the time, said the officers did not identify themselves as they entered their home, and he fired one shot, hitting Mattingly in the leg. 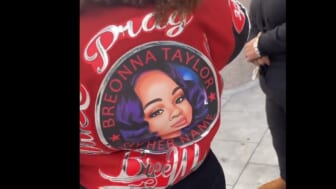 Also Read:
Breonna Taylor’s relatives say they were removed from trial because their clothes showed her face

According to The Louisville Courier-Journal, Hankison fired 10 rounds through a covered patio door and bedroom window. Some of those bullets traveled into an adjacent apartment with a pregnant woman, her partner and their 5-year-old son inside. None of them were injured.

“One or two more inches and I would have been shot,” testified the neighbor, Cody Etherton.

Hankison said he did not realize at the time he fired blindly into Taylor’s unit that another apartment was positioned directly behind the victim’s.

Prosecutors called 26 witnesses during the trial and argued that Hankison showed “extreme indifference to human life” during the shooting. Hankison’s attorneys maintained that he was acting in defense.

Hankison was fired in 2020 after then-interim Chief Robert Schroeder, according to The Courier-Journal, wrote in his termination letter, “I find your conduct a shock to the conscience. I am alarmed and stunned you used deadly force in this fashion.”

Of the three officers who raided Taylor’s apartment, only Hankison was charged for the shots that entered her neighbor’s unit. None were charged with killing Taylor, who was shot eight times.

Hankison’s criminal trial began Feb. 23 and family members of Taylor attending proceedings were asked to leave the Jefferson County Judicial Center because they were wearing clothing “emblazoned with numerous ‘Justice for Breonna Taylor’ patches and a photo of Taylor’s face,” according to WFPL.

Ju’Niyah Palmer, Taylor’s younger sister, posted on Instagram on Feb. 24 that she and her mother, Tamika Palmer, were “kicked out and escorted out of the courthouse” because of their dress code, theGrio reported. 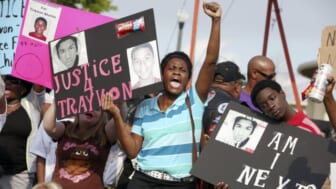 Kentucky Attorney General Daniel Cameron announced in September that Cosgrove and Mattingly would not face charges because their use of force was justified, CNN reported.

Cosgrove was fired from the Lousiville Police Department in January 2021, and Mattingly retired in June 2021.

In response to the police-killing of Taylor, the Louisville Metro Council passed “Breonna’s Law,” which bans no-knock search warrants.

Taylor’s family received $12 million from the city as part of a settlement.