The attorney has been charged with making false statements on financial documents to take money from her retirement savings to purchase two Florida vacation homes.

Federal prosecutors in Maryland are pushing back against claims by Baltimore’s top prosecutor that the perjury case against her is personally motivated and factually baseless.

The Baltimore Sun reported Friday that federal prosecutors addressed for the first time the allegations that Baltimore State’s Attorney Marilyn Mosby made against them in defense motions last month.

In a new court filing, the federal prosecutors wrote that Mosby “has invented a tale of victimhood in an attempt to deflect attention from her own behavior … As the evidence at trial will show, the only thing the defendant is a victim of is her own lies and choices.”

Mosby has been charged with making false statements on financial documents to take money from her retirement savings to purchase two Florida vacation homes. Her trial is scheduled for May 2 in U.S. District Court in Baltimore.

Mosby claimed in court filings in February that Assistant U.S. Attorney Leo Wise, who is leading the prosecution, and former acting U.S. Attorney Stephen Schenning, had racial and personal animus against her. She also claimed that U.S. Attorney Erek Barron has allowed the case to proceed because he has a personal vendetta against Mosby.

The prosecutors rejected her allegations with pointed words and repeated the evidence they say they have against Mosby.

Mosby’s attorney did not respond to a request from The Sun for comment on Friday afternoon. 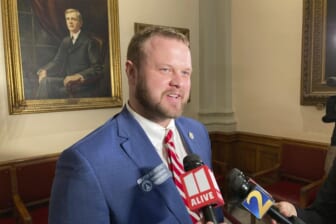 On Jan. 13, a grand jury indicted Mosby on two counts each of perjury and making a false statement on a loan application in purchasing a home in Kissimmee, Florida, and a condominium in Long Boat Key, Florida.

Mosby pleaded not guilty to the charges at her Feb. 4 arraignment. Her trial is expected to last four days. Prosecutors didn’t seek Mosby’s pretrial detention.

Mosby, 41, was elected as Baltimore’s state’s attorney in 2014 and reelected in 2018. She received national acclaim in 2015 for bringing criminal charges against six police officers in the death of Freddie Gray, a Black man whose neck was broken in police custody. Gray’s death sparked protests and riots. None of the officers was convicted.

The indictment accuses Mosby of falsely stating that the COVID-19 pandemic harmed her finances so she could withdraw $90,000 from her city retirement account. Mosby’s gross salary in 2020 was over $247,000 and never was reduced, the indictment says.

Mosby is married to Baltimore City Council President Nick Mosby, who has not been charged with any crimes.