Plaintiffs claimed federal regulators did not consider other locations for the Center that would be "much less harmful to protected resources."

A lawsuit filed by Protect Our Parks and other individuals against the city of Chicago, Chicago Park District, the Obama Foundation, and others has been dismissed by a federal judge.

According to The Hill, the plaintiffs claimed there were faults in the federal reviews of the impact that the construction and installation of the Obama Presidential Center would have on the local environment. Additionally, they claimed that federal regulators did not consider other locations for the center which would have been “much less harmful to protected resources.”

U.S. District Judge Robert Blakey dismissed the lawsuit Tuesday, writing that the city had not abdicated control of the center to the Obama Foundation and that the Museums Act “manifests clear legislative intent for the [Obama Presidential Center].”

Blakey opined that the Obama Presidential Center and others “confer a public benefit because they ‘serve valuable public purposes, including, but not limited to, furthering human knowledge and understanding, educating and inspiring the public, and expanding recreational and cultural resources and opportunities.’”

As previously reported in theGrio, Blakey was the same judge who allowed the lawsuit to proceed. 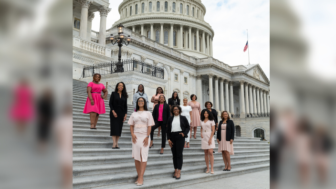 The Obama Foundation issued a statement on the ruling Wednesday.

“We know many in the city and community are eager for us to continue our work to bring jobs and investment to the South Side and the ruling yesterday allows us to do just that,” foundation officials said. “We have appreciated the voices of the many leaders who weighed in on this issue with the court to move the Center forward as the city focuses on its recovery efforts and steps to build a more inclusive economy.”

The Obama Presidential Center broke ground in September 2021 and is expected to be completed by 2025. It will feature public spaces named after civil rights icons, social justice heroes and changemakers in public service, business and entertainment. The naming process is said to give donors the option to honor those who have “fought for a more just and equitable world.” 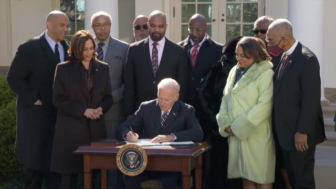 In a statement, Bezos said, “Freedom fighters deserve a special place in the pantheon of heroes, and I can’t think of a more fitting person to honor with this gift than John Lewis, a great American leader and a man of extraordinary decency and courage.”