Although it may have seemed like the plan would get over the legal hurdle, a group won its initial victory to halt the building from being built on the selected land 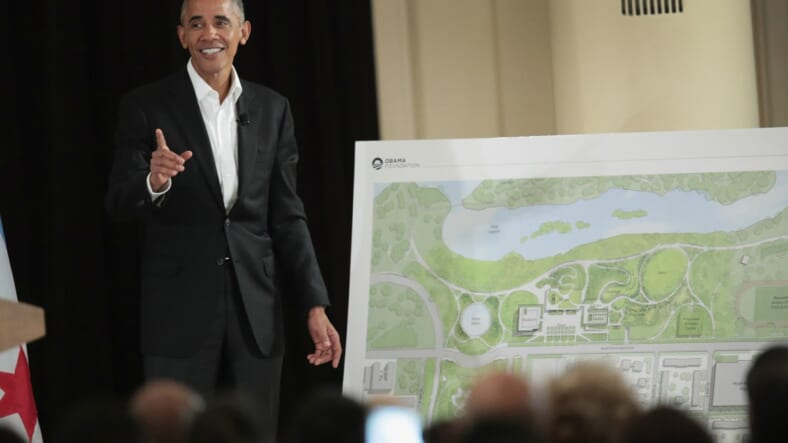 Former President Barack Obama points out features of the proposed Obama Presidential Center, which is scheduled to be built in nearby Jackson Park, during a gathering at the South Shore Cultural Center on May 3, 2017 in Chicago. (Photo by Scott Olson/Getty Images)

A judge who was nominated by Barack Obama now plays a role in hindering the efforts to build a presidential library in Chicago to be dedicated in the former president’s honor.

U.S. District Judge Robert Blakey has ruled that a lawsuit may go forward that accuses Chicago of illegally transferring public land to a private entity in the efforts to build the library, The Hill is reporting.

The $500 million presidential library planned by the Obama Foundation would be built on Chicago’s South Side, in the area of Jackson Park, which officially is city land, according to The Hill. The advocacy organization Protect Our Parks has filed a lawsuit claiming that Chicago law bars the construction of private development such as the library in public parks.

In 2014, then-President Obama appointed Blakey to the District Court for the Northern District of Illinois. Blakey was serving as a U.S. attorney as well as law professor for the University of Notre Dame Law School.

Chicago officials argue that Protect Our Parks is misinterpreting the law, The Hill reported.

Blakey’s ruling could hold up construction for months and pose a question as to whether the library can be built on park property on the city’s lakefront, according to the Chicago Tribune.

Herbert Caplan, the founder of Protect our Parks, told the Tribune that the decision was “a victory because it keeps our case alive.”

“We are not opposing construction of the Obama Presidential Center, as long as it’s not in historic Jackson Park,” Caplan told the news organization.

Members of historic Black communities near the site want the project to move forward, according to the Tribune.

“All of these things are delaying our opportunity to celebrate the Obama presidency and usher in a new form of economic development,” Carol Adams, former CEO of the DuSable Museum of African American History, told the news organization.