Supreme Court’s potential overturn of abortion rights is especially felt by Black women: ‘How dare they!’

The bombshell leaking of an opinion draft revealing the Supreme Court may overturn Roe v. Wade shocked and angered abortion rights proponents, members of Congress, and the White House.

Vice President Kamala Harris on Tuesday reacted passionately to the likely ruling while speaking at an event for the abortion rights political action committee, Emily’s List.

“How dare they!” Harris shouted in her nearly ten-minute speech. “Those Republican leaders who are trying to weaponize the use of the law against women…How dare they tell a woman what she can do and cannot do with her own body?

We are not going back because at our core, the strength of our country is that we fight to move forward.”

Harris’ impassioned remarks reflected the feelings of millions of women across the country, from those protesting at the steps of the Supreme Court to those in the halls of Congress. As the nation’s first female vice president, Harris serves as a fitting spokesperson for all who believe it’s a woman’s personal choice to decide whether or not to terminate a pregnancy.

But as a Black woman, she represents so much more.

Black women will disproportionately bear the consequences if the high court ultimately strikes down federal protections for abortion rights.

White House Press Secretary Jen Psaki noted on Tuesday while traveling with President Joe Biden aboard Air Force One that “the majority of patients seeking abortions identify as Black, Hispanic, and API.” 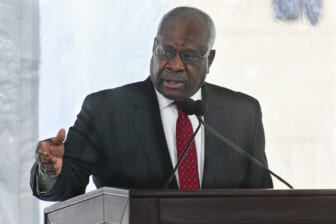 Political strategist Alencia Johnson, who served as an advisor for the Biden presidential campaign, told theGrio that as a Black woman, she was infuriated by the leaked opinion draft from Justice Samuel Alito in the Dobbs v. Jackson case that signaled the Supreme Court’s looming overturning of Roe v. Wade.

“I actually started shaking. I felt it in my body,” Johnson said of the moment she learned about the opinion draft.

“I literally thought about the Black women of all ages, of all backgrounds, of all socioeconomic statuses, who I met when I worked in reproductive rights, who I have met over the years, even people I know personally, who have had to access abortion care, and how dangerous it will be for us should we need to access health care,” said Johnson, who worked at Planned Parenthood for six years.

“There are so many things that we do not have as Black women to support us in choosing to be parents that this decision is very personal.” 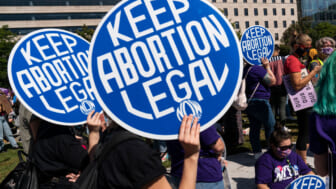 Also Read:
Republicans look to the Supreme Court for the ‘green light’ to escalate their abortion attacks

In an interview with theGrio, Planned Parenthood President Alexis McGill Johnson said that if the Supreme Court ultimately overturns Roe v. Wade, “Black women will be most harmed because of the ways in which these restrictions impact them disproportionately.”

“They are going to be the ones who are gonna have a harder time to get out of state to gain the resources to get to a neighboring state [or] take off from work.”

Black women have the highest maternal mortality rates in the United States, according to the most recent data collected by the CDC.

“Black maternal mortality is really egregious in the United States [with Black women] being three to four times more likely to die than white women across the board,” said McGill Johnson. “We are concerned about what it means both to deny access to abortion care if they intend to terminate pregnancy, and also what would happen if they were forced into pregnancy, given the maternal health outcomes as well.”

Heather Shumaker, director of state abortion access at the National Women’s Law Center, told theGrio that “If the states are allowed to go even further and full-on ban abortion like we’ve seen in Texas, the folks that are going to suffer the most are the folks that already have disproportionately poor access to health care.”

If the Supreme Court does strike down Roe v. Wade, states will be left to determine whether to ban the procedure or expand access. Shumaker noted that in states like Maryland, there are already attempts to make it easier for women who need to terminate a pregnancy.

“[States] can also do things that make it easier for folks that are coming out of state,” she added. “California is working on creating a fund that would help folks who are coming…from other locations pay for their abortion care or travel to their state. And creating logistical support websites and such that help people navigate this really complicated system, would be a great start at the state level.”

Shumaker also noted that another concern is the potential legal risks for Black women who may seek out abortion in states where it is outlawed or restricted.

“We have seen for years people be criminalized for their pregnancy outcomes and that the folks who are most often criminalized are Black and Brown people,” she said.

The issue of abortion could potentially rally voters in November’s midterm election should the conservative majority of the Supreme Court overturn Roe v. Wade. In a statement reacting to the leaked draft from Justice Alito, President Biden urged voters to elect more pro-choice Democratic candidates.

“At the federal level, we will need more pro-choice Senators and [a] pro-choice majority in the House to adopt legislation that codifies Roe, which I will work to pass and sign into law,” the president said.

While Biden’s poll numbers have been on the decline, including among Black voters, there’s data that suggests that Black voters would be more motivated or energized to show up at voting polls in response to the threat to abortion access.

Roshni Nedungadi, a founding partner of the opinion research firm HIT Strategies, told theGrio that, “72% of Black voters in the country actually say they would be more motivated to go out and vote if access to abortion was restricted or threatened in any way…this is a topic that these voters really care deeply about.”

Another demographic that may be a critical voting bloc in the midterm elections is young people of color, especially as it relates to abortion rights. Nedungadi said HIT Strategies has been speaking with groups of young voters over the last couple of years about the issue of reproductive justice and access to abortion.

“They didn’t recognize that it was actually under threat, especially those who feel that they are in protected states who have Democratic governors. Even in states like Wisconsin and Michigan, [they] really didn’t see both the Texas case and the Dobbs case as anything that that could potentially affect their access and their family and friends’ access to safe abortions,” Nedungadi told theGrio.

She said young people just didn’t believe that a decision that has been in place since 1973 could be threatened.

“The Supreme Court would never actually overturn Roe v. Wade. They might take away pieces of it or limit access, but they would never overturn it,” Nedungadi said of the young people polled.

That all seemed to change once the prospect became a real possibility. In fact, at the time that the news of Justice Alito’s leaked draft opinion became public, HIT Strategies was conducting a focus session with a group comprised mostly of young people of color and women of color ages 18 to 34. 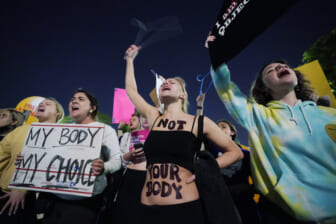 “It certainly took them a while to process what we were saying. And it very quickly turned to real anger and outrage, and they really want to be able to channel that anger and outrage into something,” said Nedungadi.

“What it felt like was it would be channeled into a motivation to vote in the midterm elections, organize get all of their friends and family out to vote, and just make sure that they are holding Republicans accountable for this decision.”

Noting the hundreds of demonstrators who gathered at the steps of the Supreme Court on Tuesday upon hearing the news about the Court’s potential decision, Johnson said it’s also important for those outraged to “call their elected officials” and “put pressure on them.”

“They’ve got to actually put pressure on the donors who donate to these electeds who are making harmful decisions and it is more than just what’s happening in Congress,” she said.

“They need to make sure that they are electing governors and district attorneys and lieutenant governors and state legislatures who are going to advance access to abortion and not restrict it.”