TheGrio channel, as well as Netflix and Peacock, have exciting Mother's Day offerings.

From the premiere of a brand new Bravo reality series to the second season returns of shows like Girls5Eva and Ziwe, theGrio is back with must-see titles to watch this weekend.

Get ready for your next reality TV obsession! Love Match Atlanta premieres after The Real Housewives of Atlanta this Sunday, introducing audiences to brand new reality TV characters from the same city.

Per the official series description, the docuseries follows Atlanta’s best matchmakers, “who are both friends and frenemies.” They use their “distinct methodology, charm, and skill” in order to attract “the hearts and dollars of Black Atlanta’s most eligible singles.” The cast includes, Ming Clark, Joseph Dixon, Kelli Fisher, Tana Gilmore, and Shae Primus.

Check out the trailer for the series below:

Ziwe is back and bolder than ever. The viral comedian returns to Showtime with a second season of her variety show, with even bigger stars than her first year.

In case you missed her, Ziwe rose to fame during the pandemic with a wildly popular Instagram Live series showcasing her unique interview style. Asking direct questions like, “How many Black friends do you have?” her success was a bright spot in 2020, weaving comedy together with politics and social justice.

In season 2, which premiered last week, the comedian sat down with popular host of The Breakfast Club, Charlamagne tha God, in an interview that already took off online. In signature Ziwe style, the host asked Charlamagne directly about his various feuds with Black women, bluntly saying, “why do you hate Black women?”

The first episode is available to stream now on Showtime ahead of Sunday night’s release. Check out a clip of her interview with Charlamagne below: 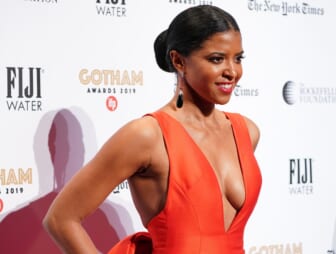 One of the first big hits on Peacock, Girls5Eva follows a reunited girl group after a 90s hit of theirs goes viral on social media. Deciding to stage a comeback, the women come together in an effort to put lightning back in a bottle.

While the series, executive produced by Tina Fey, has many memorable and comedic performances, Renée Elise Goldsberry stands out. The Hamilton alum is a scene-stealer in the series, playing Wickie, the “fierce one” in the group. Her performance earned rave reviews from fans and critics alike, and perfectly shwocsases Goldsberry’s acting, comedy and singing chops.

Both season of Girls5Eva are available to stream now.

Travel to a galaxy far, far away with the entire family this weekend. The entire Star Wars saga is available to stream on Disney +. That’s right, every film, prequel, television series is right at your fingertips — just in time for “May the Fourth” weekend.

As theGrio previously reported, the streaming service is set to drop its next Star Wars series, Obi-Wan Kenobi. Highly anticipated, the series sees the return of Ewan McGregor as the titular role, as well a brand new role played by The Queen’s Gambit breakout star Moses Ingram. Check out the trailer for Obi-Wan Kenobi below, and be sure to binge all of the Star Wars you can handle this weekend on Disney+.

“The Obamas have remained quite busy with their new life of activism which includes their issue-oriented production company, Higher Ground, which won an Oscar for Best Documentary in 2020,” the synopsis explains. “Mrs. Obama’s autobiography, Becoming, has become the best-selling memoir of all time and even won a Grammy following the publication of her book. Get lost in the incredible journey of this modern-day First Lady’s story in the making.”

Michelle Obama: Life After the White House is available on-demand on theGrio TV.