Gabourey Sidibe makes the case for a non-traditional wedding

The bride-to-be models an array of dramatic wedding looks in the cover story for Brides magazine's Style Issue, alongside fiancé Brandon Frankel.

The bride will not be wearing white. At least, that’s what Oscar-nominated actress (and author, producer and director) Gabourey Sidibe tells Brides magazine of her upcoming nuptials to fiancé Brandon Frankel, head of partnerships at the virtual music startup NoCap. In fact, Sidibe isn’t planning any “normal wedding things,” in hopes of creating a day that feels uniquely memorable.

“It cannot be a traditional wedding,” she tells Brides for the cover story of the magazine’s digital Style Issue. “Really, it can’t be. I don’t want anything done the ‘traditional’ way. Our relationship is very much on our terms and I want it to be fun, like a true party.” 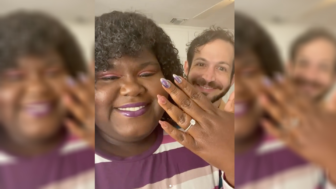 It’s fitting that Sidibe—reportedly the first Black plus-sized bride to cover the 82-year-old bridal magazine, according to the cover story’s stylist, Kelly Augustine—would also be taking an original approach to her nuptials.

“I’m super against tradition,” Sidibe maintains. “I definitely don’t need a white dress.” While one or two white wedding dresses did make the cover story, each dramatically unique gown was custom-created by a size-inclusive designer of color (Pantora Bridal, Talla Designs, Nerecina Couture, Oyemwen), making a strong case for an unconventional approach to wedding style.

“My favorite look [from the shoot] was the pink African print. Honestly, whatever I wear on the wedding day will probably be African print,” says Sidibe, alluding to her and Frankel’s intentions to include aspects of Senegalese, Jewish and American culture in their wedding. “It might have a little white, so it looks like a wedding dress, but it’s definitely going to be colorful,” she adds. 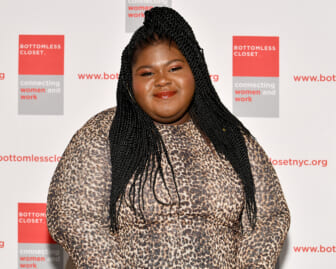 Plus, as the magazine notes, Sidibe has already had her traditional wedding moment, having helped prank late-night host Jimmy Kimmel at his 2013 nuptials at the behest of his then-bride, Molly McNearney.

Instead of the bride walking down the aisle at the start of the ceremony, Gabby, outfitted in a classic white wedding dress and long veil, made her way towards the altar, much to the confusion of both Kimmel and the couple’s guests. “It sounded fun,” she remembers of being asked to be part of the experience, “but it was not as fun as it sounded. I had to try on a bunch of dresses, but it wasn’t as serious as it feels now.”

Having had that experience, Sidibe plans to have more fun with her look when she marries Frankel, whom she met on the members-only, celebrity-favorite app Raya.

“I want lots of jewelry in my hair. I also want beautiful eye makeup with very, very long butterfly eyelashes and a very bold lip,” says Sidibe, who is considering cornrows or Senegalese twists for her hair on the big day. She also shared that fellow actress Danielle Brooks has provided major wedding inspiration thus far. 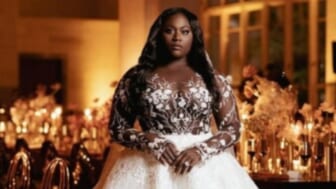 “She had two beautiful dresses—one created by Christian Siriano, who I’ve also worn before. When the time comes, I am definitely going to hit him up to create a custom look, maybe even African print,” she explains.

As for the wedding itself, the couple doesn’t share a prospective date, but aside from “a nice mix of African and Jewish touches,” Sidibe says plans are to keep the ceremony phone and social media-free by inviting “a very, very select number of people who want to celebrate us, not like seeking attention,” even teasing that the two might “just get married in the kitchen” or bathroom.

“To me, weddings are very different from marriage and partnership,” she says.

Read Sidibe’s cover story in its entirety—including more details on her romance with Frankel—in Brides.