On Facebook, Gregory Foster II reportedly shared an image of the Tops market, where 10 people were fatally shot, referencing a request for “clean up” in its aisles.

Gregory Foster II, an officer with the New York Corrections Department, is likely to be fired after joking online about the state’s recent mass shooting in a post being described by his supervisors as “vile,” noting that it “does not represent the morals and values” of the department or its staff.

In a now-deleted Facebook post that reportedly drew outrage, Foster shared an image of the Tops grocery store in Buffalo, New York, where 13 people were shot Saturday — 10 of them fatally — referencing a request for “clean up” in its aisles with the query, “Too soon?” as confirmed by The Washington Post.

Foster’s comments “are despicable, stand in violation of multiple Department rules and will not be tolerated,” the New York Department of Corrections and Community Supervision wrote in a statement.

Officials note that they have suspended Foster from his duties without pay and “engaged” a civil rights task force to seek “potential criminal prosecution” for his remarks. An internal probe would also be conducted to “identify and discipline any staff who may have engaged” with Foster’s social media post.

Foster reportedly began his career with Corrections 25 years ago and worked at Attica Correctional Facility. 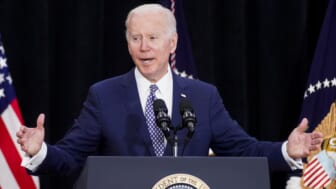 Union leader Michael Powers, president of the New York State Correctional Officers and Police Benevolent Association, condemned “an incident on social media involving a small handful of members who shared obscene jokes related to this weekend’s horrific shooting in Buffalo.” A recent statement from leaders to members called Foster’s union mates making light of his post with laugh emojis a “sickening display of disregard for all human life.”

To many, Foster’s Facebook post immediately called into question his ability to work with Black inmates, and while his union called for “due process,” its leadership noted to members they do not “support the actions that brought you to this point.”

Ten people were massacred in Buffalo this weekend, allegedly by Peyton Gendron, who was armed with an assault rifle that had the words “Here’s your reparations” on it, and also racial slurs. The confessed gunman posted an extensive manifesto online about his radicalization into white supremacy through “replacement theory,” the racist idea that imagines a plot by people of color to replace White people.