Sanders has denied rumors that Barstool Sports ponied up $1M to secure an athlete at Jackson State.

Deion Sanders has fired back at Alabama coach Nick Saban after he claimed Jackson State paid a top recruit $1 million dollars to sign a National Letter of Intent.

“Jackson State paid a guy a million dollars last year that was a really good Division I player to come to school. It was in the paper. They bragged about it. Nobody did anything about it,” Saban said at a speech on Wednesday night, Sports Illustrated reports.

He reportedly didn’t name drop but numerous reports note that Saban was referring to Travis Hunter, “the no. 1 high school prospect in the country last season who signed with Jackson State,” per HBCU Game Day.

Saban dropped the bombshell allegation while ranting about college football coaches taking advantage of NIL (Name, Image and Likeness) deals that players are now getting — including — he claims — “alumni funneling collective cash that’s distributed to all players,” per For The Win.

“We have a rule right now that said you cannot use name, image and likeness to entice a player to come to your school. Hell, read about it in the paper!” Saban said at an event in Birmingham on Wednesday night. 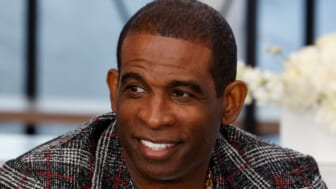 Sanders, head football coach at Jackson State University, an HBCU in Jackson, Mississippi, clapped back at Saban’s allegations in a statement on Twitter Thursday.

“You best believe I will address that LIE Coach SABAN told tomorrow,” Sanders wrote on Twitter. “I was & awakened by my son @ShedeurSanders that sent me the article stating that WE PAYED @TravisHunterJr a Million to play at @GoJSUTigersFB ! We as a PEOPLE don’t have to pay our PEOPLE to play with our PEOPLE.”

In a follow-up message posted later that day, Sanders tweeted: “Trust starts with Self ! It’s extremely hard to trust someone when u don’t trust yourself! What you’re saying is if u had that same opportunity u would do wrong. Therefore u must build Trust in u & trust GOD then your trust of others would register stronger than ever. #CoachPrime“

Sanders has denied rumors that Barstool Sports ponied up the one million to secure Hunter at Jackson State.

“A million and a half? I heard a million in a half. I heard Dave Portnoy from Barstool. That’s the biggest lie I’ve ever heard,” Sanders said during an appearance on ESPN. “You know what that is? That means we kicked your butt, we took what was ours, and now you’ve got to make up an excuse why. Ain’t nobody getting no million and a half. I wouldn’t pay my son a million and a half in NIL. How am I going to coach a guy making more than me?”

Hunter also took to Twitter to slam Saban’s claim that he was paid seven figures to sign with the Tigers.

“I got A mil?” he wrote. “But my mom still stay in a 3 bed room [sic] house with five kids,” Hunter added, along with a laughing emoji. 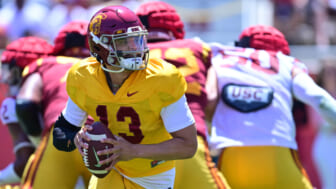 Saban has offered no receipts to support his allegations about Hunter’s huge cash deal.

“The issue and the problem with name, image and likeness is coaches try to create an advantage for themselves by going out and saying, ‘OK, how can we use this to our advantage?’” Saban said. “That’s not what (NIL) was supposed to be. That’s what it’s become and that’s the problem in college athletics right now.”