The public submitted more than 30,000 name-change suggestions for bases that currently have Confederate references.

After the public submitted more than 30,000 name-change suggestions for U.S. Army bases that currently have Confederate references, a group of former military leaders has finally presented its recommendations, according to The Washington Post.

The group — brought together by Congress in 2021 to analyze the names of nine installations in former Confederate states and change those names within three years — said Tuesday that Black Army veterans and their spouses should be used to name most of the bases.

New suggestions include renaming Fort Lee in Virginia, which is named after Confederate General Robert E. Lee, as Fort Gregg-Adams. Arthur Gregg was a three-star general in the 1940s and the highest-ranking Black person in the military, yet he couldn’t go to the Whites-only officers club. Charity Adams, who commanded a postal battalion overseas during World War II, was the first Black woman to become an officer in the Women’s Auxiliary Corps, per The Post.

More name-change advice includes renaming Fort Benning, which was named after Confederate Army Brig. Gen. Henry Benning, a man who owned slaves, to Fort Moore in honor of husband and wife Hal and Julia Moore. He was a celebrated Vietnam War vet and author, and she worked to change the way families are notified about the deaths of their loved ones fighting at wartime.

“I learned to fly helicopters at Fort Rucker. I deployed to Iraq from Fort Bragg, and I earned my jump wings at Fort Benning. All these bases honored men who wouldn’t want me or other Black Americans serving in uniform, let alone in Congress,” said Maryland Congressman Anthony Brown, an Army veteran. 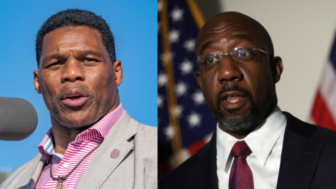 “This is about more than names and symbolism; who our military chooses to honor sets a path forward for other necessary reforms to make our armed services more inclusive, diverse and just,” Brown added.

The names must be formally submitted to Congress, according to The Post, before being approved by Defense Secretary Lloyd Austin, the first Black defense secretary of the United States. Many Republicans in Congress are reportedly resistant to the base name changes.

This step marks a major shift for activists who say the Southern Confederacy is anti-American. Former President Donald said during his presidency that he wouldn’t even consider changing the base names, The Post reported.

Confederate references are also being removed within Army bases. As theGrio previously reported, New York City’s base, Fort Hamilton, renamed a street that referenced Lee and plans on doing the same for one that references Stonewall Jackson.

A street name that references Lt. John Warren, who was killed at 22 while protecting his colleagues during the Vietnam War, will replace General Lee Avenue.