Latisha Rogers said she dialed 911 and was promptly hung up on while trapped inside the Buffalo supermarket as 10 Black shoppers were fatally shot by a self-identifying white supremacist in May. Weeks later, the dispatcher who allegedly dismissed the call has been fired.

On Thursday, the emergency services dispatcher, identified by Buffalo News as Sheila E. Ayers, was terminated from employment during an Erie County disciplinary hearing after being placed on administrative leave in May, according to a county spokesman who reportedly spoke to The New York Times via email.

After shots began to ring out during the racially-motivated May 14 shooting, Rogers, an assistant manager at the Tops Friendly Markets location, told WGRZ-TV she whispered pleas for help after dialing 911 and was responded to rudely by the dispatcher, who allegedly used a “nasty tone” and questioned why Rogers wasn’t speaking louder.

“I tried to call 911, and I was whispering because I could hear him close by,” Rogers said, according to the outlet. “And when I whispered on the phone to 911, the dispatcher started yelling at me saying, ‘Why are you whispering? You don’t have to whisper.’ And I’m trying to tell her like, ‘Ma’am, he’s in the store. He’s shooting. It’s an active shooter. I’m scared for my life.’ And she said something crazy to me and then she hung up in my face. And I had to call my boyfriend to call 911.” 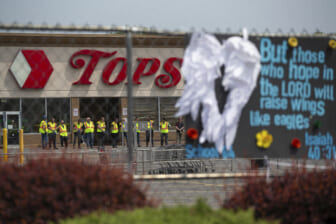 According to Buffalo News, Ayers said she is “being attacked for one side of the story.”

Mark C. Poloncarz, a county executive, said during a news conference in May that the county intended to terminate the dispatcher during a hearing in June following the “completely unacceptable” handling of Rogers’ call for help.

County spokesperson Peter Anderson told the Times in an email that “the mishandled call was investigated” beginning May 16 as the dispatcher, whose tenure working for Erie County spanned eight years, was placed on leave.

Mat Cantore, communications director for the New York-based union, Civil Service Employees Association, which represented the dispatcher, said in a statement: “CSEA has negotiated contractual due process disciplinary provisions that must be adhered to by the parties and we have ensured that process was followed fairly and appropriately here,” per the Times.

As previously reported by theGrio, 18-year-old gunman Payton Gendron faces first-degree murder charges after reportedly driving about 200 miles to the predominantly Black neighborhood in Buffalo to “save the white race,” as outlined in his 180-page manifesto.

Gendron livestreamed the shooting through a camera affixed to his helmet, according to The Associated Press. 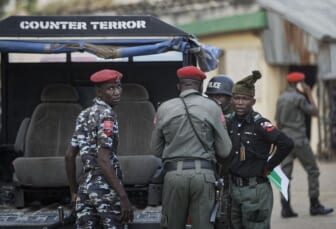 Rogers told CNN that the supermarket shooting brings back traumatic memories of the murder of her brother, Danyell Mackin, 30. He was one of four people fatally shot in 2010 at Buffalo’s City Grill restaurant.

“I’m just back at another massacre and going through this again, trying to find a healing process,” Rogers said.