As grieving families bury the child victims of the Uvalde mass shooting, many are paying tribute through customized casket wraps.

For many parents, even the passing idea of burying a child is nightmarish. For some—the nightmare has become all too real.

The May 24 shooting at Robb Elementary School in Uvalde, Texas marks the 27th school mass shooting in 2022 so far, including recent attacks at East Kentwood High School in Kentwood, Mich., and Edmund Burke School in Washington, D.C.

With mass shootings becoming the leading cause of death for children in the United States since 2020, the need for child-sized coffins has grown at a similarly alarming rate. However, only one manufacturer in the nation makes them. Cherokee Child Caskets in Griffin, Ga. is on its own when it comes to providing families in the United States with final resting places specifically designed for children. Since 1941, Cherokee has provided over 10,000 different child caskets and products that vary in size, color, styles, and other personalized options.

In recent years, those options have become even more personalized. In the aftermath of Uvalde, local funeral directors worked with casket distributor Trey Ganem from SoulShine Industries in Edna, Texas to handle customization for the victims’ burials. Ganem creates large computer-generated images that work similarly to stickers, but are commonly referred to as “wraps” for caskets. While coffins typically cost around $3,400 each and even more for customization, Ganem announced he would cover full costs for all 21 people who were killed at Robb Elementary, including the two teachers. 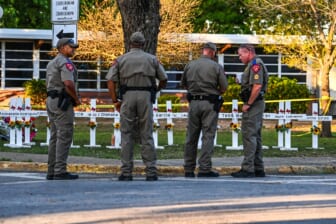 Also Read:
Uvalde is a reminder that police are not always the best narrators because they lie

For Ganem, it’s important to create a wrap based on something that was important to each child. Telling the Daily Beast about one family who shared that their daughter “loved to hike,” he explained, “They sent us pictures of her hiking and in the mountains and we’re actually putting them in with the wrap and we’ll incorporate the colors on the exterior to go with that. So it’ll look like a giant photo across the top of the casket. And it’s gonna be beautiful.”

The idea of personalized coffins for children may sound morbid to some, but these final resting places have been specially designed to honor the young lives lost. They often include symbolic designs that pay homage to each child’s legacy and personality. A wrap can contour corners and be shaped to each person’s preference. They can also withstand heat, and be cut and adjusted in numerous ways.

The technology has advanced but the practice isn’t new. For centuries, caskets and burial places around the world have had deep cultural origins that, for many communities, express that death is not the end of a person’s story. From tombs in ancient Egypt that were customized to help guide the dead to a peaceful afterlife to fantasy coffins in Ghana decorated to reflect what the deceased person loved (no matter how fantastical), custom caskets honor those no longer alive and encapsulate cherished memories.

More than decoration, the wraps for the children in Uvalde are intended to offer solace in a time of devastation and serve as reminders that the problem of gun violence remains unresolved. Whether wrapped in an image, decoration, memorabilia, or something else, mourners are discovering meaningful ways to say farewell to loved ones. Damian Ferek, president of the West Virginia company CasketWraps, explained to Kaiser Health News that wraps often incorporate “superheroes and rainbows, unicorns and teddy bears, alongside photos of the smiling children.”

Grief can be overwhelming, especially after a trauma like losing a child to gun violence. For many, art is a coping mechanism; with wraps, families often see more than just a casket, but something that was a source of joy for their child, helping parents and loved ones feel closer to their deceased children. It is a small, yet sometimes powerful way to assist families with the heavy burden of burying a child.

Desmond Upton Patton, who teaches social work and sociology at Columbia University also told Kaiser Health News that “for some parents, casket wraps allow them to take control of an experience that they essentially had no control over.” In that way, the gesture is about restoring some sense of agency, and even a final opportunity to give their young ones a parting gift.

The first funeral services for the Robb Elementary School victims were for 10-year-old Amerie Jo Garza, who was carried in a silver casket, and Maite Rodriguez, who loved “the color green.” Rodriguez’s mother, Ana Rodriguez, posted an emotional message on Facebook on May 26. “This horrific and senseless nightmare that I just can’t seem to wake up from has absolutely crushed and debilitated my life and heart,” she wrote. “The passing of my beautiful daughter has rocked me to my core and I simply cannot wrap my head around what has happened. My deepest condolences to all the families involved.” 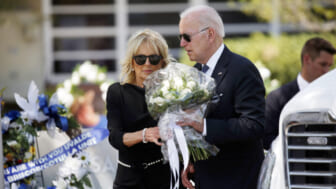 Also Read:
Uvalde tells Biden to ‘do something’; he pledges ‘we will’

Rodriguez listed things that she wanted the “world to know” about her daughter, encouraging others to share them. Just like many other parents living with the nightmare of no longer having their children after a mass shooting, she wishes for her daughter to be remembered for what she loved and how she was “sweet,” “charismatic” and so much more. The Rodriguez family was given a casket wrap for Amerie’s funeral, which took place on May 31, 2022.

As mass shootings have become frighteningly commonplace in America, conversations surrounding gun violence continue to escalate. On Friday, National Gun Violence Awareness Day recognized that over 100,000 people have died or were wounded by gunfire in the United States. In just the first five months of 2022, pediatric gun deaths have already proven a massive part of this crisis, as elementary and high schools have become regular sites for gun-related violence. For many, complacency is no longer an option; it’s time to do more than remember those who were lost.

To further encourage activism, June 3 also launched Wear Orange Weekend, in which individuals for gun control are encouraged to wear orange through June 5. The action represents a collective demand for gun violence to end while also honoring a 15-year-old Hadiya Pendleton, a Black girl shot and killed at a playground in Chicago in 2013—a week after she marched in former President Obama’s second inaugural parade. Pendleton’s loved ones wore orange (the color hunters wear in the woods to protect both themselves and others) to advocate for better gun policies. That moment became a movement for others to do the same.

Despite protests, rallies, community initiatives, current policy measures, press conferences, and more throughout America, gun deaths and mass shootings continue. Too many families are facing the haunting reality that not even their children are safe from this cycle of brutality.

Danielle Broadway is a screenwriter, journalist and activist from Stockton, Ca. who worked as an Entertainment and Arts intern for the Los Angeles Times in 2021. She has a bachelor’s and master’s degree in English from Cal State Long Beach with bylines in the Los Angeles Times, LA Weekly, Cosmopolitan, Black Girl Nerds, Allure, USA TODAY and more.