Video: Officer tells Black man during traffic stop, ‘This is how you guys get killed out here’

"It's exactly what the inference is that bothers me," said Miami-Dade Police Interim Director George Perez, who ordered a probe.

A video of a traffic stop last week is going viral after a Miami-Dade police officer reportedly told a Black driver, “This is how you guys get killed out here.”

The incident occurred last Wednesday in North Miami Beach when, according to NBC 6, Gerardson Nicolas was stopped by a motorcycle cop as he was driving to work. Nicolas started recording the interaction on video and captured the unidentified officer saying, “Give me your driver’s license, registration and insurance. If not, you will not be going to work today. Simple thing, man. This is how you guys get killed out here, man.”

“What? Say that again? Say what you just said,” Nicolas responds, as the video shows.

“Registration and insurance,” the officer answers.

As the video started to go viral amid speculation the lawman was threatening Nicolas, supporters of the officer are alleging he was referring to the fact that Nicolas was not wearing a seatbelt.

However, Nicolas told NBC 6 he started recording the interaction because his fears mounted as the officer grew more frustrated with him.

Nicolas was ticketed for not wearing a seat belt, not having a proper license tag and insurance, plus for driving with a suspended license. The officer did not arrest him or have his car towed. 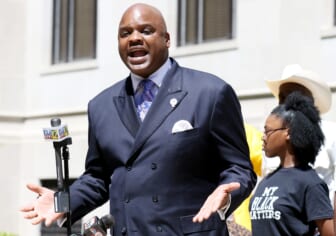 The motorcycle cop has been placed on desk duty while an internal affairs investigation takes place.

“Rest assured we are committed to transparency and community trust and will address all matters of public concern equitably, fairly, and in accordance with applicable laws,” a statement from the Miami-Dade Police Department reads.

“It’s exactly what the inference is that bothers me,” said Miami-Dade Police Interim Director George A. Perez, who ordered the probe.