Writers and executives behind the project gathered at the American Black Film Festival for an intimate discussion about the upcoming series.

“Rap Sh!t” is almost here! The highly anticipated series from the mind of “Insecure” creator Issa Rae debuts on HBO Max next month, but made its official premiere last week at the American Black Film Festival. TheGrio was able to see the first episode at the festival and also attended an HBO Max POV event, where the writers of the series broke down their experience developing the show, filming in Miami and more. 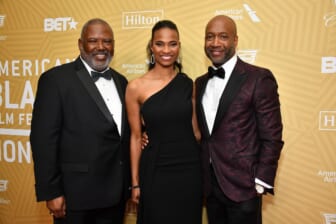 As theGrio previously reported, Issa Rae’s new show follows two high school friends who reunite to form a rap group in Miami, Florida. In development since 2019, Rae wrote the pilot episode, and now fans are just weeks away from getting a glimpse at what she’s been up to since “Insecure” came to a close last year. At ABFF this year, HBO Max threw a POV event, featuring an intimate conversation with some of the creatives behind the series.

The talkback took place on the third day of the festival, and included writers Elize Diop, Chris Sanford, Aida Osman, Nina Gloster, and executive producer Montrel McKay. Osman not only writes for “Rap Sh!t,” but stars as Shawna opposite KaMillion (who plays Mia). During the conversation, Osman gushed about how she feels now that the show is coming out.

“I feel amazing,” she quipped. “We wrapped in December, so I’m just waiting for ya’ll to see it at this point. I’m far removed from that! I’m excited to get reacquainted with who that person was who filmed that show. I don’t know who that is!”

Breaking down how Shawna came to life, Osman referred back to Rae’s pilot. “Issa did a really good job of laying out these really distinct and stark characters,” she explained. “Mia and Shawna are polar opposites but they have all of these different, beautiful things that they share being Black women. We sat in the writers’ room and I think we built these beautiful, complex women that are flawed and working on themselves, like we all are. I’m happy with where we got to with Shawna and Mia.”

Sanford spoke to how personal the writers’ room got, which led to the creation of these layered and complex characters. “We were hashing out stories and thinking back about how we felt at that time of our lives, how we felt about relationships, how we felt about trying to make it,” he explained. “We put a lot of ourselves in our characters too.”

Gloster, who wrote for “Star” on Fox, broke down the characters’ universal aspects, despite their specific circumstances. “I mean, they’re rappers but they’re Black women in 2022,” she shared. “Our show looks so specific from the outside looking in, but once viewers start watching you’ll see yourself in somebody in this show because the characters are so nuanced.” 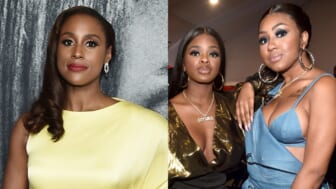 Elize Diop’s journey to “Rap Sh!t” is perhaps the most unique of them all, making her way to the show by way of her sister: Issa Rae. That’s right, the “Insecure” star is her older sister, and insisted she be part of her new series. Rae first told Diop she wanted her in the writers’ room when she had just gotten a great job at a museum, and declined. Still, Rae insisted.

“She kept following up and was like, ‘I really want your voice in the room,'” Diop said. “It helps to have people in the room who have actual life experience. I think she valued my outside experience and saw how it could contribute to the story. Since she believed in me, I started believing in myself, and that’s really important.”

As an executive, McKay explained how bringing on showrunner Syreeta Singleton really brought the show to the next level, especially once they started crafting the writers’ room. “When we built out the room, we really saw the show come to life,” he shared. “Issa was just so grateful to Syreeta and the team for bringing these characters to life, she was like, ‘This show got so much better when they got involved. You can see the personal elements that they brought to it and the diversity to the characters and their perspectives.