OPINION: The South Carolina senator's unwavering support for Trump—despite the testimony at the Jan. 6 committee hearings—while blaming Democrats for rising costs as the GOP continues to vote against measures to help Americans is the height of hypocrisy. 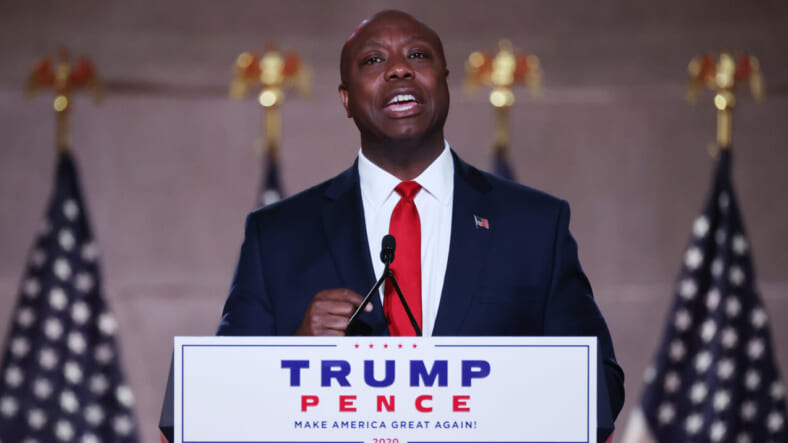 U.S. Sen. Tim Scott (R-S.C.) stands on stage in an empty Mellon Auditorium while addressing the Republican National Convention at the Mellon Auditorium on August 24, 2020 in Washington, D.C.(Photo by Chip Somodevilla/Getty Images)

If “see no evil” was a person, this week he would be Sen. Tim Scott (R-S.C.), the sole Black Republican in the U.S. Senate.

So let me get this straight. The latest play from Republicans is to ignore the Jan. 6 select committee hearings and try to pivot to ranting about the same issues that they have continually blocked progress on, like preventing price gouging at the gas pump, lowering inflation costs for parents, families and caregivers, and lowering prescription medication costs. That’s exactly what happened this week when Sen. Scott was asked if he was watching the Jan. 6 committee hearings.

Picture this. On one side, there are Fulton County election workers Shaye Moss and her mother, Ruby Freeman, testifying to Congress about being afraid for their lives after Trump targeted them for simply doing their job and counting votes. On the other side, there’s Sen. Scott ranting about supporting Trump no matter what, refusing to watch the Jan. 6 select committee hearings and complaining about rising costs due to inflation. Call it willful ignorance, or call it blatant negligence. Whatever you call it, Sen. Scott is exhibiting in real time exactly how incapable he and Republicans are of facing the truth or taking the basic steps to protect our democracy while Black women are being targeted on the frontlines. Sen. Scott is also making it abundantly clear that this weak and disingenuous diversionary tactic to shift the focus to inflation costs is all Republicans have to fire back at the horrible truths being laid out by largely Republican witnesses at the committee hearings.

On its face, the talking point is accurate. Yes, people are struggling to put gas in their cars, put food on the table and make ends meet. It’s just that Sen. Scott is leaving out the part where last month, Republicans voted against stopping price gouging by oil and gas corporations in order to lower gas prices. Last year, Republicans voted against continuing those $300-$500 monthly checks to parents and families when they obstructed the extension of the child care tax credit, a credit that helped feed millions of children. Republicans also voted against paid family leave, livable wages for caregivers, cutting child care costs, expanding Medicare benefits, and more. Everything that Republicans are complaining about, they helped create or exacerbate.

Honestly, none of the Republican talking points hold up against their votes, and none of their distractions hold up against Trump’s own appointees, advisers, allies and even one of his children testifying before Congress that he knew he was lying and planned the unsuccessful coup attempt we all witnessed on Jan. 6. I particularly enjoyed the clip of Ivanka Trump undermining Trump’s election fraud claims that earned a feature on The Shade Room. In the face of all of this, Republicans are still rejecting reality and holding firm in their fealty to their bootleg authoritarian leader. They are actively trying to cover their eyes and refusing to acknowledge any responsibility or culpability for anything at all.

But Sen. Scott and his crew seem to have underestimated the fact that the public is not stupid. People are watching these hearings, and they are learning all of the ways that Trump plotted to steal the 2020 election. And now, like many rational human beings, they want accountability. According to a recent ABC-Ipsos poll, 58 percent of the country believes that Trump should be charged with a crime, higher than polls conducted days after the violent attack on the Capitol building. On top of that, 60 percent of Americans say that the hearings are fair, so there goes the Republican argument that this is just the latest witch hunt.

It should surprise no one that Republicans will hold firm against what the public wants. I mean, it took Republicans weeks to even call President Biden “president-elect” after a historic turnout and Trump losing by more than seven million votes and 74 Electoral College votes. At this point, the sad reality is that Sen. Scott and Republicans are simply incapable of doing better for the sake of all of us. They have made it clear that we the people do not matter. Rather than fight for our democracy, they are burning it down right beside Trump in the name of preserving their power. Ultimately, it will cost all of us.